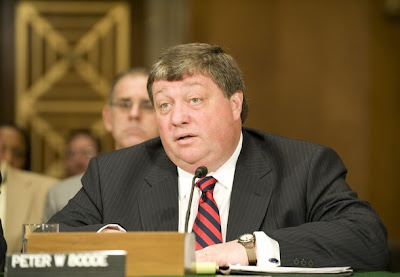 A daily newspaper in Malawi, the Nyasa Times, reported yesterday that our man in Lilongwe, Ambassador Peter Bodde, pictured above, explained in a radio interview where the United States stands on potentially cutting aid to the county over the recent conviction of a trans-gay couple:

Malawi has been assured it will continue to get support from United States of America for the country’s socioeconomic development in spite of the 14 year-jail sentence that has been given to gay couple Tiwonge Chimbalanga and Steven Monjeza.

The two gay lovers were arrested by police in Malawi two days after they had had a traditional engagement ceremony in Blantyre’s Chirimba Township, December 2009. [...]

However, US ambassador to Malawi, Peter Bodde told Capital Radio a closely-held broadcaster on Thursday the Obama government was not ready to stop funding the country’s social and economic development activities following the landmark ruling but expressed hope that government would change the law to accommodate same-sex liaisons.

“My government is concerned about the recent court case and the court ruling in the sense what happened with the conviction of the two gentlemen convicted on homosexual acts. We see this as a step back on Malawi’s good record on human rights that’s [sic],” he said.

While admitting that Malawi is a sovereign state and should be allowed to run its own affairs, Bodde observed that the US had been the country’s long time partner; hence the need to be advised as a friend who is going off track.

“We have always prided ourselves and our shared values but sometimes when our values differ we have a responsibility to tell each other so,” he said.

It's good to see in the past few weeks that the State Department and the White House have deplored the miscarriage of justice for Tiwonge and Steven, and that our ambassador is using frank language in public to urge Malawi's leaders to recognize their mistaken homo-hatred.

However, while I don't want to increase poverty or hunger or any related condition on Malawians because of potential cuts in U.S. aid, I would like my government to attach a few strings to the aid that requires the country's leaders to respect and protect the human rights of its gay and trans citizens.

The article goes on to cite a gay humanitarian worker's views on this matter:

And writing in The Times Online readers comments page, Dave Armstrong who volunteers in Malawi, said he was a gay but did not subscribe to cutting aid to the impoverished nation in order to fight for gay rights.

Armstrong wrote: “I am volunteer for a charity working in Malawi, caring for 5,500 orphans. I am also a gay man. Aid is essential to countries like Malawi. It would be very dangerous to withdraw support. Yes it can be used as a tool to negotiate, but there would be serious ramifications if withdrawn.

“A longer term issue of how effective this aid is needs to be addressed, but first we need to secure the release of Steven and Tiwonge on human rights issues.”

Speaking of working to gain the liberation of the jailed couple, click here to learn about the Malawian Trans-Gay Unity Day on June 15, an effort to bring gays into the streets to publicly demand Tiwonge and Steven's release.
Posted by Unknown at 11:58 PM
Email ThisBlogThis!Share to TwitterShare to FacebookShare to Pinterest