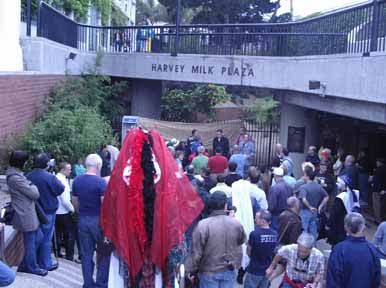 It gives me enormous pleasure to announce that gays in San Francisco will be participating in this year's IDAHO -- International Day Against Homophobia and Transphobia.

Held annually every May 17, because on that day in 1992, the World Health Organization removed gayness from the index of global diseases and related health problems, the 2010 version of IDAHO promises to be the best yet.

What: Kiss-in & Solidarity Speak Out

We will gather at the historic plaza to express our love for ourselves and our brothers and sisters around the planet, many of whom cannot engage in public displays of affection because of local laws or threats of violence.

The action, which will incorporate not just smooching, but hugging and hand-holding too, is sponsored and organized by Gays Without Borders/SF activist org, and the humanitarian relief agency Rainbow World Fund. Both groups collaborated on the IDAHO 2009 protest at the same location, calling for an end to the torture and murder of gay Iraqis.

An invitation to speak and lock lips on May 17 was extended to the lovely lesbian equal marriage activist Molly McKay and her dear wife Davina Kotulski, but they had to decline. Why?

Because they'll soon be leaving for a visit to Austria and the Czech Republic, where they'll be strategizing and networking with gays over there. Molly and Davina will be at the IDAHO action in Vienna. When those girls put their minds to supporting international activism and solidarity, they prove they really are willing to go quite far to join in the fun!
Please, wherever you live, get to or stage an IDAHO action. It can be as small as two people kissing, or as large as dozens of gays at San Francisco's Harvey Milk Plaza. Do your part for global gay solidarity on May 17.
Posted by Unknown at 2:04 PM
Email ThisBlogThis!Share to TwitterShare to FacebookShare to Pinterest

It makes no sense to do this in Market and Castro! It's like a everday even there! If we want to make a statment, we need to do it in downtown, maybe union square!Otherwise, it means nothing! There is not point for me to go to castro to make tell other gay people who we are for something that we do almost everyweek!

you are free to do whatever you wish. however, i like being in the castro and it is far easier to get a gay crowd there, then in union square. don't like my idea? then organize your own action.

for everyone else who wants to stand in solidarity in SF with IDAHO, come join me on may 17 at milk plaza.

Michael, I love that SF is doing this as well, but I have to agree with the person who wondered why this is in the castro. I know it's easier to get a crowd there. but the point of the Paris Kiss-in was not doing it in the Marais, but rather where people who are not familiar with the LGBT community would see it. I think Union Square, Embarcadero Plaza or even Pier 39 should be considered for next year. Just a thought. Love the blog btw!

glad you like the blog. so, are you volunteering to organize for next year? it's so easy for folks to say 'i don't approve of the kiss-in in the castro. do it elsewhere.'

it's another thing for those who say that to do some organizing themselves.

you like union square and pier 39. great. i wonder why you didn't organize the IDAHO event at those places.

if just half of the critics complaining about the castro location, such as the complainers on towleroad this morning, are serious about other locations being better -- start organizing at those locations!

there was nothing stopping you and others from getting something together for may 17.

Funny, I didnt say anyting about not approving of the castro as the location. I understand your frustration with "armchair quarterbacks" but take a breath ok? It was not a criticism It was simply a suggestion for the future.

to why people didnt organizise an event elsewhere. I cant speak for anyone else, but I had never even heard of IDAHO before today. (A fact that might speak to the subject of visability.)

See you on Monday

i must admit to the frustration, for the second year in a row about the SF action on may 17.

last year, we assembled at milk plaza and lots of folks made the same complaint about the location. oh, and that it was on a weekend, and the same day as bay to breakers.

as expected, none of those complainers lifted a finger to take the lead for IDAHO in SF this year.

sorry to be so grouchy about your suggestion, but coming on the heels of the complaints lodged at towleroad, and the complaining from last year, i keep wondering why the complainers don't get something organized the way they want.

there is plenty of work to be done by SF activists about global gay issues. may i suggest you help plan future actions?