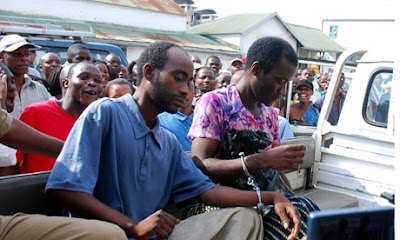 Back in December in the southern African nation of Malawi, two gay men, Tiwonge Chimbalanga (20, above left) and his partner Steven Monjeza (26, above right), held a marriage ceremony and declared their love for each other.

This act of defiance led to their arrests, and they're currently in jail, awaiting a judge's verdict that will come on Tuesday, May 18, regarding the charges they face. Malawi outlaws homosexual relations and each man faces up to 14 years in prison.

Longtime gay human rights advocate Peter Tatchell of London's OutRage! has been in touch with the couple, and is working on their behalf. Tiwonge and Steven recently sent a message to OutRage!, expressing gratitude:

Tatchell sums up their bravery thus:

"They have taken a pioneering stand for the right to love. They love each other, have harmed no one and believe that love should not be a crime. It is nobody’s business what they do in the privacy of their own home. There is no evidence that they have committed any crime under Malawian law. They should not be on trial or in prison."

And on May 6, Congressman Mark Kirk, a straight Republican from Illinois, along with Congresswoman Tammy Baldwin, a lesbian Democrat from Wisconsin, introduced a House resolution calling on the Malawian government to release the imprisoned couple forthwith.

Even though more than a week has passed since Kirk and Baldwin put forward the resolution, I feel it's not too late to applaud their bi-partisan collaboration on behalf Tiwonge and Steven.

Over in Malawi, the Nyasa Times newspaper ran a story about the resolution, showing us that it had an impact. Here are excerpts from the resolution:

Calling on the Government of the Republic of Malawi to respect the fundamental human rights of its citizens, and for other purposes.

Whereas the 2009 United States Department of State Human Rights Report on Malawi found that `societal violence and discrimination based on sexual orientation occurred' and stated that `approximately 34 percent of gay men in the country had been blackmailed or denied services such as housing or healthcare due to their sexual orientation';
Whereas high levels of stigma and discrimination, exclusionary policies, and harsh criminal penalties against sexual conduct by consenting adults constitute a fundamental human rights violation and also discourage individuals from accessing needed health services or disclosing their sexual activities to healthcare providers, thereby perpetuating the fear and silence that seriously impede global efforts to reduce incidence of HIV infection;
Whereas, on December 28, 2009, Mr. Tiwonge Chimbalanga and Mr. Steven Monjeza, citizens of the Republic of Malawi, were arrested by the Malawian authorities on charges of `committing acts of gross indecency with another male person';
Whereas Mr. Chimbalanga and Mr. Monjeza remain imprisoned and have been repeatedly denied bail, while reports indicate that Mr. Monjeza's health has drastically deteriorated during the prolonged detention; [...]
Now, therefore, be it

Resolved, That the House of Representatives--

(1) calls for an immediate release of Mr. Tiwonge Chimbalanga and Mr. Steven Monjeza in accordance with international law and on humanitarian grounds;

(2) urges the Government of the Republic of Malawi to urgently address the pervasive violation of human rights in Malawi and the criminalization of conduct by consenting adults; and

Posted by Unknown at 3:56 PM
Email ThisBlogThis!Share to TwitterShare to FacebookShare to Pinterest