New Plaque of Milk
at His Castro Camera Store 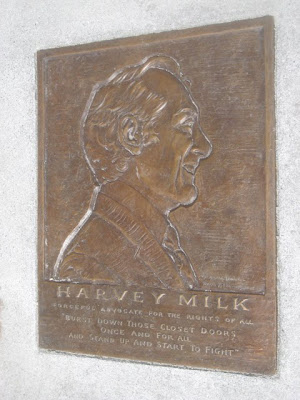 (The quote from Milk reads: "Burst down those closet doors once and for all, and stand up and start to fight.")

I snapped a few photos yesterday of what was once Harvey Milk's camera store on Castro Street. The gay historical society has gussied up the window with artifacts from many moons ago, a new plaque is in the sidewalk, and a capsule explanation about the man, his times, and his influence hangs in the door window.

Since the focus of Milk Day and all the hoopla this weekend is upbeat and cheerleading-for-Democrats, one important fact has been overlooked, and it is also omitted from the camera store display.

May 21, 1979, is the day the fags in Frisco rioted over the judicial leniency handed down to Dan White for assassinating Harvey and George Moscone. Who remembers the White Night Riots?

But why bring up a fuller picture about those times for Milk Day, when we our official gay leaders have Speaker Pelosi's butt to kiss and the Democratic Party wants to contain our anger? Best not to remind the homos of their proud fighting history.

On to more pictures of the store and what it looks like this weekend. 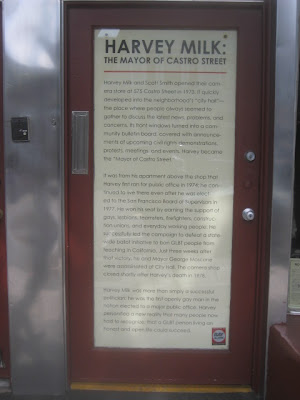 The front door is totally obscured by the short history of Milk. 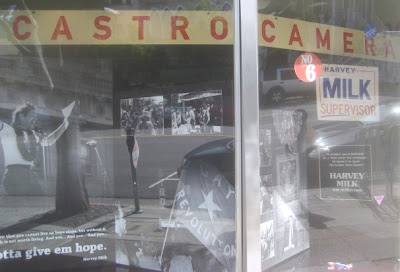 The window display. Sorry for the reflections and glare. 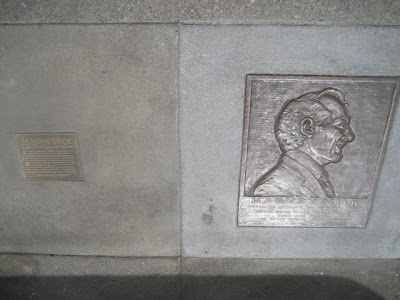 The old, almost-impossible to read and see plaque in the cement, and the newer plaque on the right.
Posted by Unknown at 3:48 PM
Email ThisBlogThis!Share to TwitterShare to FacebookShare to Pinterest

May 21, 1979, is the day the fags in Frisco rioted over the judicial leniency handed down to Dan White for assassinating Harvey and George Moscone. Who remembers the White Night Riots?

Actually both Stuart Milk and Nancy Pelosi did. Stuart used it to remind people of the anger in the community over being treated less than. Speaker Pelosi acknowledged Stuart's reminder in the conclusion of her remarks, "...as Stuart mentioned it isn't a happy day in terms of the verdicts coming down but it is the eve of a very happy occasion. Harvey would be 80. 80? He will always be young in our minds and in our hearts and in the spirit he gave us. But as we leave here in a very hopeful way.. (she used the quote about health care when she talked about jumping over the fence parachuting in etc.) We're going to get over the fence so to on these other issues, gays in the military DADT, ENDA, Marriage issues and it comes right back to what Harvey Milk said (about his election) It gives a green light to move forward and that the doors are open to everyone."