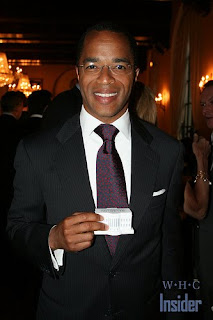 WaPo's Capehart's Axelrod Meeting at WH
A few weeks ago, after gay military vets staged a civil disobedience at the White House fence, openly gay Washington Post opinion writer Jonathan Capehart had harsh words for the vets and other activists:

Now, allow me one small gripe about yesterday's action. I want repeal of don't ask don't tell as much as the six veterans who put their bodies where their mouths were by getting arrested. But I have two suggestions for them for next time -- because there will be one. First, change the scene of action from the White House to the Capitol. Repeal of don't ask don't tell requires congressional action. And nothing says "Listen to me!" like civil disobedience in the office of the Speaker or the Senate Majority Leader. Second, if they insist on the White House as a venue, they should at least ensure that Obama is on the premises. He was en route back to Washington aboard Air Force One when the DADT Six were carted away.

Gosh, that is remarkably in-line with Obama administration thinking, wouldn't you say? I do, and I also wonder if Capehart's three visits to the White House colored his thinking.

The visitor logs reveal Capehart on October 9, 2009, had a one-on-one meeting with public liaison Valerie Jarrett, four days later he was one of almost 400 guests at the Obamas' fiesta Latino event, and on January 27 he was one of eight people at a meeting with David Axelrod, senior adviser to the President.

Oh, one more little thing about that fiesta. The logs show that a Margaret K. Capehart was at it. Relative of Jonathan's? I can't say, but assuming she is, it's good to see him spread his access to family. I'd do the same if I was receiving invitations to the White House. Ole!

For all I know, Capehart may have been an Obama fan long before enjoying a few meetings and one party at the White House. He may not work at any Gay Inc org, but he is a key player in the games waged by Gay Inc, and his criticism of the vets at the fence sure get him a few more invitations from the administration.
Posted by Unknown at 8:03 PM
Email ThisBlogThis!Share to TwitterShare to FacebookShare to Pinterest

PUH-LEEZE! Would-be [White] House Fagroe Capehart has always had his head so far up ObamaRahm's ass that he can see Russia out his mouth.

The only way Aunt Jonnie could be less of a Queer Quisling is if he worked for a Repug.