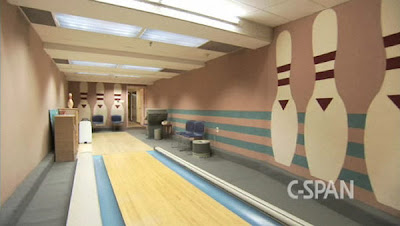 Gay Leader's Visit to the
White House Bowling Alley
What's in the White House visitor logs and of key interest to the gay community, continues to intrigue me. My looks at visits by leaders at the Human Rights Campaign and the National Gay & Lesbian Task Force, showed a mix serious and symbolic visits were made. The same can be said about a gay leader and highly-successful fundraiser for President Obama. In the photo above of NGLTF's ED Rea Carey, stationed near where Obama was about to speak at the White House's gay cocktail party last June, a man stands guard over her. He is Jeremy Bernard, from Los Angeles, and he's partnered to Rufus Griffin, and they were profiled in a very informative profile from 2008 in the LA Weekly:

Bernard and Gifford have very little, if anything, in common with the Old Gay approach typified by the Human Rights Campaign's need for straight actresses to peddle an agenda. They are the new guard, or New Gays, who are more politically savvy. The New Gays cultivate, work with and fund gay political candidates. They withhold their talents and money from straight politicians who don't follow through on their promises, while supporting those with what they view as a progay track record.

And they never seek the straight world's approval for their own gay existence. The New Gays understand their power in today's political system, and they use it. And in this winter's slog of primaries, they just might use it to propel a candidate toward the White House.

Yes, Bernard was part of the successful team that got Obama to the White House, and he's had plenty of access to it. Visitor logs reveal Bernard's been to the White House 40 times, and many of the visits were described as "White House Liaison Meeting." It takes three clicks to view all of his visits here, here, and here. He's the director of the National Endowment for the Humanities, so it makes perfect sense that he would have reason to keep going to the White House for political meetings.

And his partner Gifford works at the Democratic National Committee, where he is the finance director. Looks like he's been at the White House nine times. These two are quite the Washington gay power couple.

But only Bernard enjoyed a visit to the White House bowling alley. On December 2, 2009, he was one of only 11 people bowling a few games at the White House, and records show the visitee was Grace Northern, who works in the personnel office. Gifford's visits don't list this event. Maybe he's not a bowler.

Let's add Bernard's 40 visits and Gifford's 9 to the 123 combined visits of HRC and NGLTF folks, and my running tally of White House visits by gay leaders now stands at 172.

Now, who in the gay community needs hardball political arm-twisting at the White House over Don't Ask, Don't Tell or employment protections with ENDA, and lots of other key gay concerns when our leaders are enjoying Presidential cocktail parties, a movie night and access to the bowling alley?
Posted by Unknown at 11:11 PM
Email ThisBlogThis!Share to TwitterShare to FacebookShare to Pinterest