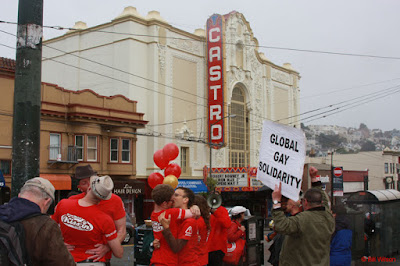 (May 17 IDAHO public display of affection, with the Castro Theatre in the background. Photo credit: Bill Wilson.)
An estimated 35 gay activists staged a small, but enormously passionate kiss-in yesterday at San Francisco's historic Harvey Milk Plaza, as part of the International Day Against Homophobia and Transphobia (IDAHO).

We had a few very short speeches about the importance of IDAHO and reminding folks that there is homophobia in the Bay Area we need to combat. One example was the December 2008 gang rape by four men of a lesbian in the Bay Area city of Richmond. She was targeted first by having a rainbow pride flag sticker on her car.

To set a romantic mood, Gary Virginia brought out a boom-box, threw on a Dean Martin CD of classic love songs, and turned up the music to maximum volume.

One couple, two young gay men, and a slightly more mature bear couple, were the most passionate kissers of the day. Even when the action was officially over, both couples kept right on smooching.

One young man from Kansas identified as straight but kindly asked if he could wear a red kiss-in shirt and join the rally saying, "Things like this don't happen often in Kansas. This is great!" Another middle-aged man from the Midwest was in town for the city's Bay to Breakers race the day prior and said, "I'm not gay but I totally support equal rights for everyone. I don't know why it is such a big deal for people."

In attendance were reporters and cameramen from KPIX and KTVU, Bay Area Reporter photographer Rick Gerharter, a photographer from Getty Images, and independent media reps and bloggers.

This is a video activist Steven Crouch made today from his footage shot at yesterday's action:

Here is the fabulous story that ran on KTVU last night:


These are two more great photos from Bill Wilson, showing couples embracing and locking lips, all in the name of a wonderful cause: global gay solidarity: 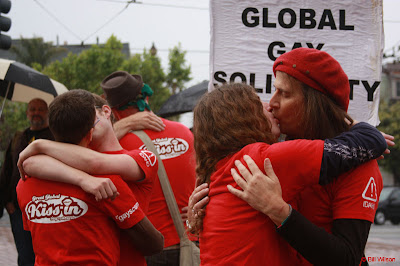 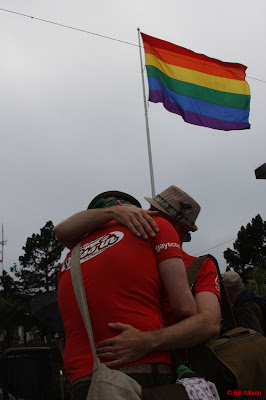 Lots of big thanks and huge hugs to all the wonderful people who made the San Francisco kiss-in happen, even with the lousy weather. Our rainbow love was shining brightly yesterday, as it does everyday. And much gratitude to the IDAHO organizers and all the other global activists who had their own kiss-ins and visibility actions.

Let's all work together to make IDAHO 2011 the best yet!
Posted by Unknown at 10:36 AM
Email ThisBlogThis!Share to TwitterShare to FacebookShare to Pinterest