Raw Story: FBI Probed Milk, Moscone
Before They Were Murdered 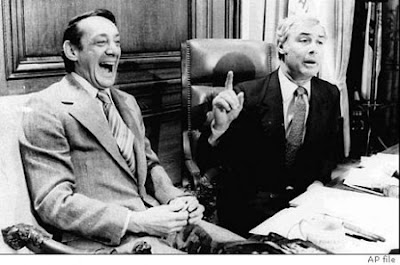 The progressive news site Raw Story today is running an exclusive story about recently released records from the FBI pertaining Harvey Milk and George, who were the subjects of probes by the feds at the time of their assassinations.

Thanks to the Freedom of Information Act request I filed for any documents on the men the FBI may have in its archive, the agency was obliged to send me the records that generated the article today.

Check out the entire piece at Raw Story. Here is an excerpt:

Federal agents were investigating the late San Francisco Supervisor Harvey Milk and the late mayor of San Francisco George Moscone for alleged political corruption when both men were murdered in November 1978, according to Federal Bureau of Investigation files.

The man convicted of killing both men, then-Supervisor Dan White, was also the subject of a separate FBI political corruption probe before he gunned down Moscone and Milk at San Francisco's City Hall.

Agents in the FBI's San Francisco bureau were looking into whether Moscone and Milk had collaborated to "defraud the federally sponsored San Francisco Community Development Fund," according to documents obtained by San Francisco blogger and gay rights activist Michael Petrelis. (The relevant pages from those documents can be seen here.) [...]

Posted by Unknown at 11:11 AM
Email ThisBlogThis!Share to TwitterShare to FacebookShare to Pinterest