Jew Wiesel's Lesson for the Gays 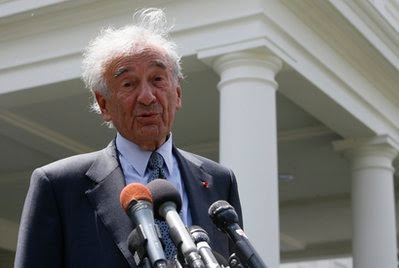 (Elie Wiesel speaks to the press, after lunching with the President on Tuesday.)
Oy, vey. Those Jews are like the gays, in that they're never satisfied. Always kvetching about something, and at important times, over vital matters, taking out old-fashioned, and still effective, full-page newspaper ads. Wait a sec. That only applies to the Jews, not the fagelahs, but I'm getting ahead of myself.

So, survivor of the Nazi camps and a major ripoff by Barnie Madoff, Elie Wiesel, noshed with President Obama at the White House this week. The New York Times reported yesterday:

The [Tuesday] lunch meeting between Mr. Wiesel and Mr. Obama came three weeks after Mr. Wiesel took out a full-page advertisement in a number of United States newspapers criticizing the Obama administration for pressuring Mr. Netanyahu to stop Jewish settlement construction in East Jerusalem, where Palestinians would like to put the capital of an eventual Palestinian state.

The advertisement, in which Mr. Wiesel wrote that “Jerusalem is the heart of our heart, the soul of our soul,” alarmed White House officials, in part because it came on the heels of similar advertisements from the World Jewish Congress and grumbling from members of the American Israel Public Affairs Committee, a powerful pro-Israel lobbying group, that Mr. Obama was pushing Mr. Netanyahu too hard.

Back in April, after the Human Rights Campaign placed full-page ads in gay papers that aren't read in the White House or in Congress, targeting the gay community not the Obama administration, I called on them to take out ads in Washington papers. Send a message to the President through national or mainstream advertising. Radical concept not on HRC's radar.

But for the Jews favoring Israel's housing and security positions, they have a few bones to pick with Obama, and they use standard political pressure tactics to get his attention, to the point where he's gotta meet with Wiesel. Just like the Jews, a niche voting bloc with big bucks to throw at candidates, the gays are on somewhat comparable footing with the Jews, in terms of votes and dollars.

But unlike the Jews, we don't demand our well-funded HRC, NGLTF, GLAAD and other Gay Inc orgs pool their resources and political power, and take out ads in the New York Times and Washinton Post, to lobby Obama.

Jew Wiesel did it. Fagelah Geffen and crew could pick up a few pointers from him about wielding power in Washington and getting the President's full and undivided attention.

The incompetence of Gay Inc, compounded by the failure of any mogul to fund a media campaign at this crucial legislative time, makes me verklempt.
Posted by Unknown at 10:26 PM
Email ThisBlogThis!Share to TwitterShare to FacebookShare to Pinterest

Elie Wiesel is a big booster of the "Holocaust Industry," that is manipulating the crimes of the Nazi genocide to justify Israeli expansionism. So while I agree with putting maximum pressure on Obama in pursuit of LGBT liberation, I think its a bad idea to even appear to back continuing Israeli encroachment onto shrinking Palestinian territory.

Until we embrace accountability for all tactics, strategies and organizations we'll just keep pissing in the wind.

As much as we are "leaderless," we have never tried to figure out how to actually WIN. We have never had a cohesive, united strategy. Instead we just keep doing anything with the uninspiring goal of "one of these days."

Sooner or later we need to focus on winning. That requires accountability and a real, sustainable strategy.

As for ads, BRAVO Michael! I've been saying the same thing for years...but not just in the NYTimes and WAPO but also in papers that Middle America reads like USA Today and bigger regional papers.

STOP THE GODDAMN PREACHING TO THE CHOIR ONLY [even if the ads AREN'T just meant to attract more donors to keep a group alive]...AND STOP ONLY PREACHING THE "INJUSTICE" ANGLE...MOST NONGAYS DON'T CARE!

It's waaaay past time we gave NONgays a REASON to join us in demaning the President get his balls back from Robert Gates and join Congress in not just repealing DADT but stopping discharges IMMEDIATELY which HE does NOT need Congressional permission to do.

A. The business case. Studying the ban, discharging gays, recruiting and training their replacements has cost taxpayers BILLIONS of dollars over the life of the ban. And now phony repeal advocate Gates is spending MORE taxpayer dollars to "study" it AGAIN! [Read: stall until repeal is legislatively impossible.]

B. The national security case. Obama said it himself TEN MONTHS AGO: "[T]hese [discharges of patriots who often possess critical language skills and years of training and who've served this country well] underscore the URGENCY of reversing this policy not just because it's the right thing to do, but because IT IS ESSENTIAL FOR OUR NATIONAL SECURITY." - Commander-in-Chief Barack Obama, June 29, 2009.

SO MUCH FOR "URGENCY."

He added last October what he'd frequently claimed when asking us to hire him: "especially when we're fighting two wars."

And with HRC and Gill, et al., there's also enough money to do some TV spots to convince nongay American that THEIR and their family's security is in danger because of DADT.