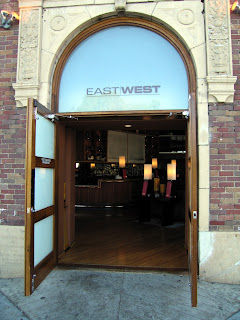 LA Joins Jamaica Boycott;
Exile Writer Speaks of Anti-Gay Violence
Out of the blue, an email was sent to all boycott organizers from the owner of the very popular, and very political, East/West Lounge, a Mr. Clifford R. "Trip" Wilmot III. Sounds quite A-gay to me and in this case, I have no objection to building a coalition with Trip on behalf of global gay activistmand the worsening homo-hatred in Jamaica.

We now have three key cities on board: LA, NYC, SF. Don't be shy. Add your city to the list.

A bunch of thank yous have been sent to Trip, and I look forward to him sending me photos and videos of Jamaican products coming off his bar's shelves, and then poured down the sewer.

Effective immediately we will no longer sell Myer's Rum, in support of www.boycottjamaica.org. In addition, our plans to add Red Stripe Beer are canceled.

We will be swapping all products out for Cruzan Rum and will change the signage as soon as possible. Below is the explanation why Oscar and I, as owners, think this is necessary.

By 2008, things had only gotten worse, according to The New York Times. The article said, "For years, human rights groups have denounced the harassment, beating and even killing of gays here, to no avail."

A State Department report cites reliable claims of harassment and arbitrary detention of gay people by public employees, with little if any investigation by police.

Given the island's ongoing war against GLBT people, Jamaica has left us no choice but to call for a boycott.

If you care about the human rights of gay, lesbian, bisexual and transgender people, you won't buy Jamaican products.

Isn't it time we stop rewarding this hate state with our tourism dollars? Isn't it time to stop drinking Jamaican beverages, such as Myers Rum and Red Stripe Beer? Yes, it is.

This nation should be avoided at all costs until the Jamaican government takes action to end the country's virulently homophobic climate and draconian laws that persecute homosexuals.

Until Jamaica takes the following easy steps an official boycott is in effect:

1) Publicly commit to end gay bashing on the island and improve the human rights situation;

2) A statement from the Prime Minister clearly and unequivocally condemning violence against GLBT people and expressing regret for past violence.

Right on, dude. I'm right behind you on your action and am proud to post your note here and around the web.

And here is a reminder from a Jamaican voice about just how dangerous life is for our brothers and sisters down there.

Last week, at the University of Georgia in Athens, a noted Jamaican exile writer and advocate, Michelle Cliff gave a reading from her latest book, and she plainly laid out her views of her homeland:

She was educated in New York City and also at the Warburg Institute at the University of London. Michelle writes novels, short stories and poems based roughly on her own life experiences. ...

“I come from Jamaica and a culture that is extremely homophobic. There is a culture in Jamaica that advocates the physical destruction of gays and lesbians” Cliff said. Cliff has not returned to Jamaica since 1975 due to the violence.

“The violence is becoming a lot more escalated now since there is a Jamaican gay community out in the open. It has a lot to do with the religious groups” Cliff said.

Don't forget to visit boycottjamaica.org.
Posted by Unknown at 7:42 PM
Email ThisBlogThis!Share to TwitterShare to FacebookShare to Pinterest