Iraq's Gay Killings Condemned in San Francisco;
Fox, CBS Locals Send Crews
San Francisco's newly formed Gays Without Borders chapter, which is affiliated with the Gays Without Borders group on Yahoo, earlier this evening gathered 15 concerned gay and straight Americans to consecrate the base of the rainbow flag pole at Harvey Milk Plaza as the symbolic Tomb of the Unknown Gay.

We took this action because of wire reports from Baghdad about the murder of at least six gay men in the last two weeks, killed because of their homosexuality and repugnant religious hatred stirred up by Muslim clerics. The names of the dead have not been reported in any news accounts, hence, the designating of the area for unknown and unnamed gays.

We also condemned the murders, the firebombing of a local hangout for gays, and called on President Obama to bring the US troops home.

Media good fortune smiled upon us today. Cameramen and reporters from the local Fox and CBS affiliates, KTVU and KPIX, showed up for our memorializing and promised they'd have reports aired on TV tonight.

However, they did not know if the stories would also make their stations' cut of what gets posted to their web sites. If you're tech savvy, please watch the KTVU and KPIX news tonight, capture the airing of the murdered gay Iraqis stories, and share it on YouTube. Don't forget to send me the URLs for the clips.

We have to show the global gay community and the world that Gays Without Borders in San Francisco will not be silent as fags are slaughtered in Baghdad.

Here are a few photos from the vigil and press conference: 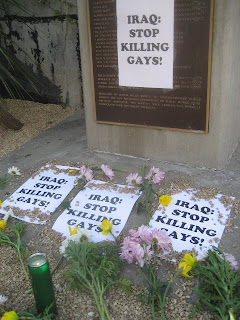 The plaque on the base of the rainbow flag's pole,
surrounded by signs, flowers and candles, constitute our
Tomb of the Unknown Gay. 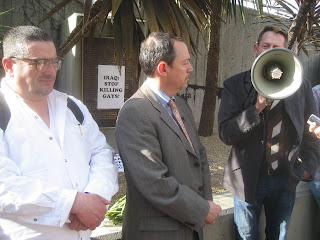 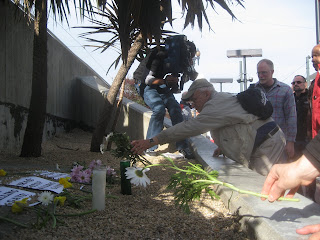 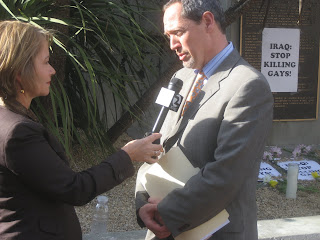 The reporter from KTVU interviewing Bevan after the event.

Posted by Unknown at 8:00 PM
Email ThisBlogThis!Share to TwitterShare to FacebookShare to Pinterest

I find the killing of gays in Iraq to be abominable. But why no uproar in the gay community about the 600,000 Iraqi innocent civilians that have been killed by the U.S. invasion of Iraq? Why no memorials set aside for those unfortunate individuals, who made the mistake of merely being in the wrong place at the wrong time.

Why no mention of the five million Iraqi citizens who have been forced to move from their destroyed homes to other countries because of this war. Where is your outrage?