'Stony' George Shultz Hears 'Internationale' At SF Lincoln Brigade Ceremony
Gather round, comrades! I wish to share with you a story from the People's Republic of San Francisco, that is one of those "only in San Francisco" weird political tales people who don't live here seem to love. Okay, even residents of San Francisco appreciate such stories!

You couldn't be at Sunday's ceremonies on the Embarcadero for the dedication of the national monument honoring volunteers of the Abraham Lincoln Brigade without being moved. For some, it was a twinge of emotion as they recognized the fragility of the lineup of elderly veterans. [...]

A brass band played anthems of the Spanish Civil War as the crowd gathered. Mainly, they were old lefties, people whose idealism is untarnished, who'd marched against fascism, for unions, for tolerance, against the war in Vietnam, and recently, just as ferociously against the war in Iraq.

Carlos Westendorp y Cabeza, Spanish ambassador to the United States, was there to express the gratitude of his country, and perhaps because of his presence, Protocol Chief Charlotte Shultz was there, too, with her husband, former Secretary of State George Shultz. As they settled down on a makeshift podium along the front of the monument, I watched Shultz and the crowd, and I thought, "They're going to eat him alive." When the band played the Socialist-Communist anthem "The Internationale," some of the vets and audiences raised their fists in salute. I couldn't see Shultz's expression, but several readers e-mailed later that it was stony.

When, after noting the presence of the ambassador, Mayor Gavin Newsom acknowledged the former secretary of state, there was a loud chorus of boos from one side of the crowd. [...]

I wish I'd known about the event beforehand because I would have been there to honor the Brigade volunteers and their heroism, not to mention also witnessing the surreal spectacle of Shultz being present as "The Internationale" was performed at a public ceremony.

No photos or videos of the event have surfaced on the web, but I did find this photo of Shultz on Flickr.com taken a few days before the Brigade event. If you ask me, Shultz looks rather "stony" in the picture, a look he always had: 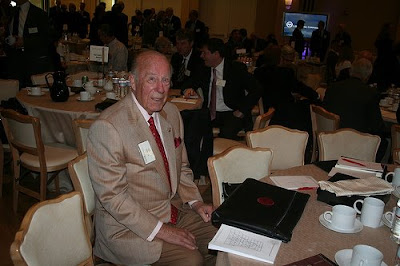 Here is a short YouTube video on the February 28 groundbreaking for the Abraham Lincoln Brigade memorial:

Finally, this clip is from Warren Beatty's Academy Award-winning film "Reds," featuring "The Internationale" as the Russian people rise up and overthrow the tsar:

Posted by Unknown at 10:54 AM
Email ThisBlogThis!Share to TwitterShare to FacebookShare to Pinterest

Most people talk about Bush being the worst president ever and bla bla bla. Not many know that it was Shultz and his ilk that brought him to power, as they did Reagan. I sure hope History give him his "proper due".