Obama Visits Getty Mansion on
SF Billionaire's Row
The cranky and very opinionated man behind ZombieTime chooses to remain anonymous, which is fine by me because puts out great photos and videos. His conversational style of writing engages me. Oh, let me make a full disclosure here: he filmed me and Hank Wilson zapping UN head Ban Ki-Moon last summer, which was a top-ranked video on ZombieTime. Yeah, I like the guy, and some of his skeptical perspectives.

After a few weeks of not reading up on his latest activities about town, I checked out his site today and read about Obama's apparently hugely successful fundraising gigs here this week, including a stop at the Getty mansion:

On April 6, 2008, Barack Obama visited the San Francisco region, zipping from event to event all day long, from one end of the Bay Area to the other.

What? you might ask. How did I miss that? If only I had known, I would have gone to see him.

Well, there's a reason you didn't know about it. Obama didn't want you to know about it. Because the events he was attending weren't for people like you.

They were for people with lots and lots of money, who use that money to gain access and influence with politicians -- especially politicians who might become president . . .

And not only were the non-affluent excluded from these events, even the media was disallowed . . . I wasn't about to let that stop me. When I hear the words "No media allowed," that's when I reach for my camera. 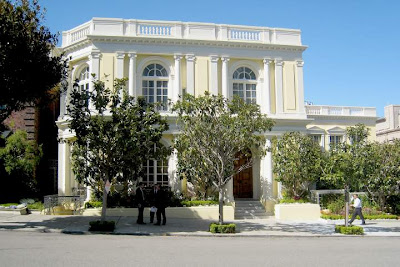 And I set my sights on the grand prize: The fundraiser at the home of Ann and Gordon Getty, on what has come to be called "Billionaires Row," reputed to be the wealthiest block in the world . . .

Wait just a minute there. If you do the math, on just this one day in the Bay Area, Obama went to four events, three of which had $2,300 minimum donations per ticket, and the other $1,000 minimum per ticket. Each of the events, from the various descriptions, held as many as 400 people (the Getty mansion has a ballroom that reportedly seats at least 300). 400 x $2,300 = $920,000 per event, times three events = $2.76 million, plus the other event, which undoubtedly puts him over $3 million in contributions for this one day alone. And who knows how many other similar days he schedules in other parts of the country . . .

It was not easy finding out exactly where and when to go. The precise time of the fundraiser was never revealed, and the Gettys own many properties in the area. But another local columnist dropped a clue as to where it was happening: "The hottest ticket in San Francisco this weekend may well be the $2,300-a-head reception for Democratic hopeful Barack Obama at the Pacific Heights mansion of billionaire couple Ann and Gordon Getty." Ah, that Getty home -- it could only be the legendary one in the heart of Billionaires Row.

I scoped out the address and took a guess at the time -- late afternoon -- only to find I had arrived over an hour early. I sauntered up to one of the attendants and asked, "Doesn't the fundraiser start at four o'clock...?" "Five," he corrected me. "That's right -- five, " I said, and walked away. 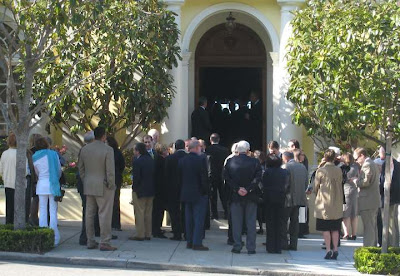 The mansion, seen here in wedding-cake colors, may not look overly impressive at street level, but it sits on the crest of a ridge overlooking the bay; the estate actually cascades down the hillside behind, out of sight from the front façade.

Thanks for getting to the gig, ZombieTime, at least from the outside, and capturing fabulous photos. Read the full report and look at more photos here.

Posted by Unknown at 9:36 PM
Email ThisBlogThis!Share to TwitterShare to FacebookShare to Pinterest