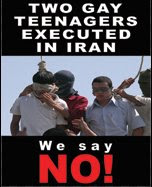 Clinton Questioned About
Iran's Gay Executions
The only country I am aware of where the government in the past few years has executed homosexuals is the Islamic Republic of Iran. Have I missed the stories about Egypt, Iraq and other countries putting gays to death?

The Wikipedia entry for LGBT rights in Egypt says nothing about executions. The Iraqi LGBT entry, of course, notes the warring militias have killed gays and transgenders. I don't deny that gays in both countries face tremendous fears of abuse and in Iraq, murder by death squads, but the interviewers from the Philadelphia Gay News who spoke with Sen. Hillary Clinton should have been more precise in their question.

On the other hand, if the countries mentioned by PGN have executed gays lately, please send links to stories about the deaths and I'll link to them.

From the PGN interview with Hillary Clinton on April 4:

PGN: What changes would you make toward governments that execute gay people, such as Iran, Egypt and Iraq and numerous other countries in the Middle East and Africa? Will you offer political asylum?

HC: I would be very strongly outspoken about this and it would be part of American foreign policy. There are a number of gross human-rights abuses that countries engage in with whom we have relations and we have to be really vigilant and outspoken in our total repudiation of those kinds of actions and do everything we can, including using our leverage on matters such as aid, to change the behavior so we can try to prevent such atrocities from happening.

Yes, that is a damn good answer, on the surface. However, I wish to point out that in her seven years in the US Senate, Clinton has not vocally objected to Iran's horrendous violations of the human rights of gays. She has not condemned the Iranian government's executions of gays, and I would be the first to applaud if she did open her mouth about the killings.

And Clinton sidesteps the question of offering political asylum to gays fleeing oppressive regimes. I would have liked for her to spell out her plans, either as senator, or, if elected to the White House, as president, regarding asylum for gay exiles and refugees.

Unfortunately, PGN did not pose a follow up question to her on this matter. I must also note that one of the PGN interviewers, Mark Segal, the publisher, failed to note his $1,000 donation to Clinton last year.

All these concerns aside, I still am quite pleased PGN raised international gay issues when they spoke with Clinton.

A reader sent a message that in January 2002 Saudi Arabia executed three homosexuals by beheading them. Click here to read the Amnesty International report on the executions.

And my friend writer Patricia Nell Warren also sent info and links on the killings of gays.

so when will I stop seeing t-shirts and signs reading "queers for palestine"...I can only surmise that these people hate jews more than they fear moslems.