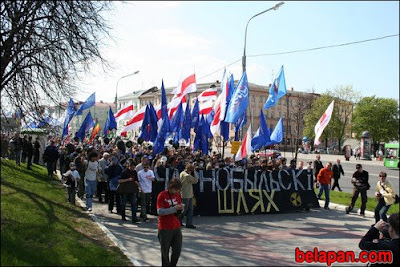 (Notice the rainbow flag in the center-left portion of the photo, between two blue flags.) 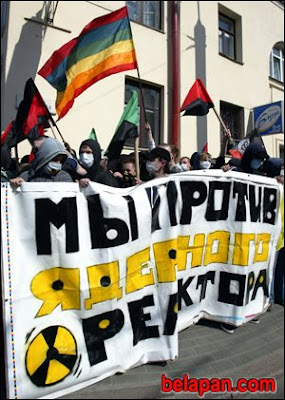 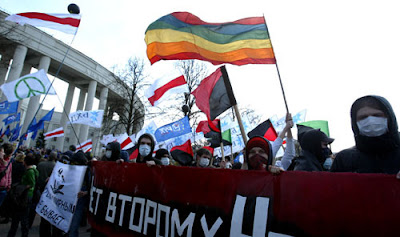 (The rainbow flag, waving in the wind at the march in Minsk.)

First Time in Belarus: Rainbow Flag at Chernobyl Protest
A big reason why I'm a member of the Gays Without Borders network is so I can learn about gay people in other countries, and how they engage in their organizing efforts for tolerance, equality and human rights protections. This report from the gay Belarus advocacy organization TEMA was posted to the Gays Without Borders group on Yahoo, along with a few photos.

This news from Belarus won't be reported by the mainstream corporate media, but nevertheless to be shared far and wide. I salute the gays, and everyone else, who participated the Minsk march today commemorating the Chernobyl nuclear disaster of more than two decades ago.

And I'm proud to play my town-crier role and call attention to this report:

More than a thousand people took part in the opposition's march staged on the occasion of the 22nd Chernobyl accident anniversary in Minsk on April 26. It was a first time in a history, when rainbow flag used on political public event in Belarus.

The crowd started gathering at the square in front of the National Academy of Sciences at 2 p.m. and a short rally followed. Leaders of opposition had did speeches.

Sergey Androsenko, 19 y.o. gay - leader of Gay Youth Association, stay with big rainbow flag in the center of crowd. Anarchists promise to protect gays on this event if somebody will try attack them.

The crowd then walked some two miles on sidewalks from the square to a church built to commemorate Chernobyl victims at the intersection between Arlowskaya and Karastayanavay Streets.

As the demonstrators were crossing Yakub Kolas Street, some 100 youths separated from the crowd and entered the roadway but some of the organizers intervened and managed to talk them into returning to the sidewalks.

After reaching the church, the crowd observed a minute of silence for those who died of illnesses caused by the Chernobyl fallout and laid flowers at a monument commemorating the victims. The demonstrators started dispersing shortly afterward.

Police did not interfere and no arrests were reported.

This case definitely will become a part of Belarusian LGBT history as a date of beginning of cooperation between civil society and LGBT movement, and the date of proud when LGBT activists didn't afraid to become visible.

This report was prepared by Svyatoslav Sementsov who is the co-president TEMA information center, which maintains the group's web site and archives. Click here and learn about the group and the people in it. You'll be linked to TEMA's pages in English.
Posted by Unknown at 2:07 PM
Email ThisBlogThis!Share to TwitterShare to FacebookShare to Pinterest

that is one gutsy lad
http://www.queersunited.blogspot.com