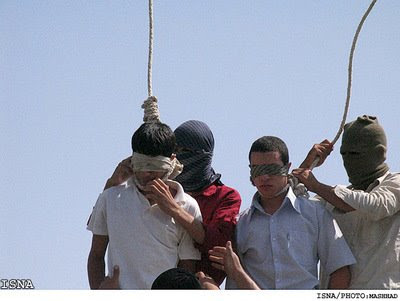 HRW v IGLHRC: Battle Over Gay Iranians
Yesterday I received this email from Scott Long, director of the gay unit at Human Rights Watch, using one of his several pseudonymous email addresses, which was about a private meeting to be held next week at office of the International Gay and Lesbian Human Rights Commission. I guess Long wanted me to be concerned that IGLHRC was holding an invitation-only meeting about the dire plight of gay Iranians.

I've learned over the years in my international gay activism that Long is not only self-appointed gatekeeper, but is also quite devious in his approach to global gay human rights advocacy, so I wasn't surprised he forwarded this message to me:

As some of you are probably aware, this year IGLHRC will honor the Iranian Queer Organization (IRQO) as the recipient of our 2008 Felipa Award. The Award ceremony will be in NYC on April 28 and of course all of you are welcome to attend the award ceremony.

IGLHRC also plans to have a closed-door strategy session with Arsham Parsi(IRQO's executive director) on April 29, from 12 to 2 PM. The meeting is by invitation only and we hope to use this opportunity to discuss with Arsham ways our organizations can support the work of IRQO and other Iranian queer activists.

I am writing to you to invite you to join us for the meeting on April 29. For Drewery and those who are not in New York area, you can join us by phone. The meeting will be at IGLHRC's office (80 Maiden lane Suite 1505) over an informal lunch.

I hope to see (or hear) you all then. Also if you can think of other activists whom you think can benefit from this meeting, please don't hesitate to share their contact information with them so that I can invite them to the session.

Have a great weekend!

Apparently not pleased with IGLHRC's meeting plans, Long and HRW today announced they're holding a separate competing forum with the head of the Iranian Queer Organization. Long's event will happen the day before IGLHRC's chat-fest. As far as I can recall, this the first such open meeting on gay Iran being held by Long and his group. Heck, I don't remember Long holding a single public forum at their offices about _any_ international gay human rights matter.

Arsham Parsi of the Iranian Queer Organization (IRQO) will discuss the IRQO's work with Human Rights Watch, and the challenges in advocating for sexual rights for Iranians in their home country as well as Iranian refugees and asylum-seekers worldwide.

IRQO is an international, non-profit, queer human rights organization based in Toronto, Canada with key workers in Europe and Iran. It provides assistance to Iranian gay, lesbian, bisexual and transgendered refugees all over the world, endeavoring to help when Iranian lesbians or gay men are threatened with deportation back to Iran, as well as assisting Iranian LGBTs (lesbian, gay, bisexual, transgender) to obtain asylum in friendly countries. Arsham Parsi helped found the IRQO while seeking refugee status in Turkey in 2004. He is visiting New York to receive IGLHRC's Felipa award on April 28.

His presence provides an opportunity to learn about the IRQO's work, the inequities that Iranian refugees and asylum seekers face, and persecution based on sexual orientation and gender identity in Iran.

We hope you can join us for this meeting.

One might think two non-governmental organizations that care deeply about gay Iranians would put aside differences, unite for the sake of the Iranians and the good of gay activism, and hold a single jointly-sponsored public meeting.

But that would require the massive egos and competing agendas at HRW and IGLHRC to not only work with each other in a respectful manner regarding meetings on gay Iran, but would also demand that they extend the respect to volunteer activists who don't work for the non-profit advocacy organizations, and unfortunately, this respect is something neither group is capable of at this time.

While I applaud HRW for this small step forward in being more transparent on its gay Iran agenda, I wish to remind everyone that Scott Long and HRW have still not released their long-promised monograph on the terrible situation for Iranian gays. Click here for the background about the broken commitment Long made in the summer of 2006 to provide the community with well-documented report on the horrendous persecution of Iran's gay community.

With great interest, and some anxiety, I look forward to reading and hearing accounts of both the HRW and IGLHRC meetings next week in New York City.
Posted by Unknown at 10:48 AM
Email ThisBlogThis!Share to TwitterShare to FacebookShare to Pinterest

Scott Long is such a fanatical heterosexist bigot. He has made me question everything that comes out of "Human Rights Watch."