Gays, Egyptians Discuss
HIV Arrests in Cairo
Earlier this month the AP wire put out a story of great concern to human rights, gay and HIV/AIDS advocates, one that I hope would generate actions at and visits to Egyptian embassies and consulates in the U.S. and around the globe:

An Egyptian judicial official says four HIV-positive men have been convicted of being homosexual and sentenced to three years in prison followed by three years of close police supervision . . .

The defense lawyer for the five, Adel Ramadan, says the judge convicted the men of the ''habitual practice of debauchery,'' a term used in the Egyptian legal system to denote consensual homosexual acts . . .

The verdicts are the latest in recent arrests and trials in Egypt of HIV-positive men that human rights groups say serve to criminalize AIDS in this country. In mid-January, four other HIV-positive men were sentenced to one-year prison terms on similar charges . . .

Ramadan, from the Cairo-based Egyptian Initiative for Personal Rights, said the men were arrested, abused and tortured over the past seven months. He said they were verbally insulted and beaten by police officers wearing gloves who sought to 'extract confessions' of homosexuality from them . . .

My friend Hank Wilson, veteran HIV and gay rights campaigner, recently told me he'd be up for visiting the San Francisco consulate for the Egyptian government and expressing our deep and serious concern for our gays and people with AIDS in Egypt. Neither one of us felt silence in this situation would be acceptable to us as activists, and even if IGLHRC and Human Rights Watch were unable to organize protests at Egyptian government offices abroad, we would at least raise our voices in protest in at least one U.S. city. Today was the day we both had the time to visit the consulate. 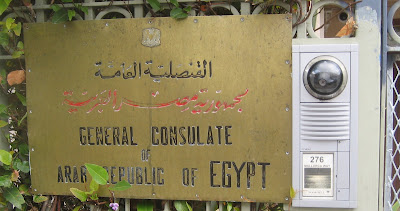 The consulate is temporarily located on Mallorca Street in the Marina District, while the actual consulate and residence on Pacific Avenue undergoes extensive renovations. 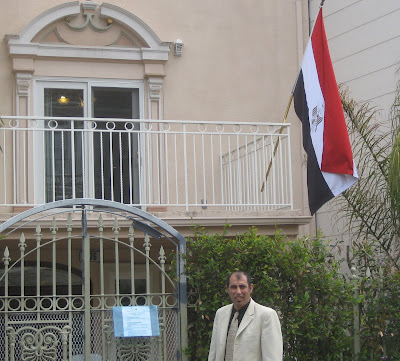 We stood out front taking photos and this gentleman came walking along. He introduced himself as Nabil El Gendy, the protocol officer for the consulate. We chatted on street about human rights in his country and asked if we could come in to talk. He said yes. 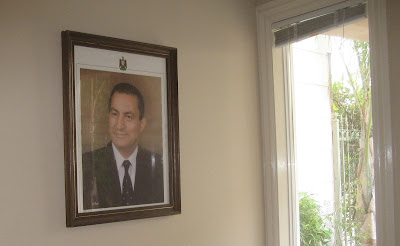 We entered on the basement level, where the reception area is located, with a large photo of Egyptian leader Hosni Mubarak on the wall. Hank and I explained to Nabil El Gendy and his assistant that all gay people and many AIDS groups in San Francisco are very worried about the violations of international human rights standards toward gay men and people with HIV. Nabil El Gendy said he was not familiar with the recent crackdowns and persecutions against gays with HIV in Cairo, but was pleased we were interested in his country. He also recommended that we contact the political affairs officer at the embassy in Washington. We promised to do that.

After our discussion about gay men in Egypt and the persecutions they face, Nabil El Gendy thanked us for coming by the consulate and talking with him. He said he likes Americans and that San Francisco is a beautiful and he's enjoyed living here for almost 30 years. Many thanks to Nabil El Gendy for being so gracious and listening to our concerns, especially since we arrived at his consulate without an appointment.

I'm sending off a letter of protest to embassy officials in Washington and hope that our small act of solidarity today somehow helps our brothers and sisters in Egypt.
Posted by Unknown at 2:59 PM
Email ThisBlogThis!Share to TwitterShare to FacebookShare to Pinterest