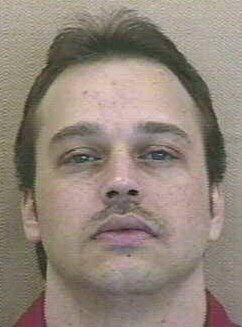 NC Pansygate Gov Allowed
Execution of Gay Murderer
Mike Easley, the Democratic governor of North Carolina, generated some controversy yesterday when he backed Hillary Clinton for president and said she "makes Rocky Balboa look like a pansy." I did some Googling of Easley and his record on gay-related matters and quickly discovered he refused clemency in 2003 for convicted murderer Eddie Hartman, a gay man whose sexual orientation was a factor at trial and during sentencing.

Here's some background on the Hartman case, reported by veteran journalist and media commentator Doug Ireland for Z magazine:

Is North Carolina going to execute a man this Friday because he is gay? That's the disturbing question raised by the case of Eddie Hartman, who is scheduled to be put to death by lethal injection this Friday, October 3.

Eddie Hartman is a murderer and a gay man. These facts would not be connected had the prosecution not mentioned Hartman’s sexual orientation repeatedly during the penalty phase of his trial for murder. This was a blatant attempt to discourage the jury from considering Hartman’s abusive childhood in sentencing.

It worked. Rather than sentencing Hartman to life in prison, the jury chose to ignore mitigating factors and send him to the execution chamber.

The prosecutor admitted he’d waved the pink flag before the jury in a deliberate appeal to homophobia.

At a hearing on an appeal of the death sentence, the district attorney, David Beard, admitted he’d waved the pink flag before the jury in a deliberate appeal to homophobia. He wanted, he said, to minimize Hartman’s history of sexual abuse, which he claimed was "different for homosexuals." But this appeal was heard by the same district court that had convicted Hartman -- and by confirming the death sentence, the court ignored the taint to justice produced by this bizarre and specious argument.

Hartman’s sexual orientation had nothing at all to do with the crime he committed. Nothing. Hartman was 29 when he was convicted of shooting one of his mother’s ex-boyfriends. Hartman grew up in a home from hell. His mother was a deeply disturbed woman who tried to commit suicide multiple times, slashing her wrists before her child’s eyes. She had six husbands and a series of other boyfriends while Hartman was growing up . . .

This will be a test case of whether elected officials will stand up for justice in the current climate of anti-gay backlash.

Now it’s up to North Carolina Governor Mike Easley, a Democrat, to decide whether or not to commute Hartman’s death sentence to life imprisonment. This will be a test case of whether elected officials will stand up for justice in the current climate of anti-gay backlash following the Supreme Court’s ruling striking down sodomy laws . . .

In urging clemency for Hartman, Amnesty International has joined all the major national gay, lesbian, bisexual and transgender rights organizations, including the Human Rights Campaign, the National Gay and Lesbian Task Force and the Lambda Legal Defense and Education Fund.

This verdict, achieved as it was by blatant prosecutorial misconduct, has left a shameful stain of bigotry on the North Carolina legal system. Will Governor Easley have the courage to stand up for the honor of his state and erase this stain? By this Friday, we will know the answer.

As a gay man opposed to the death penalty, in all cases and in every country, it saddened me to learn the depressing answer to the question posed by Doug Ireland. Easley lacked the required courage to commute Hartman's death sentence and Hartman was executed on October 3, 2003.
Posted by Unknown at 10:54 AM
Email ThisBlogThis!Share to TwitterShare to FacebookShare to Pinterest