Obama Lowered US Flag for Aurora, Newton, Boston not Charleston

After a dozen individuals died in the Aurora, Colorado, theater act of domestic terrorism, President Obama used his power of proclamation to lower the Stars and Stripes flown at half staff to honor the victims in July 2012.

At the end of 2012, after another gun-related act of homegrown terrorism in Newton, Connecticut, fatally shot 20 children and 6 adults, President Obama decreed flags on government property lowered out of respect to the dead.

When three people were killed and more than 250 were maimed and injured after the Boston Marathon terrorist bombing in March 2013, President Obama issued a another flag lowering proclamation. 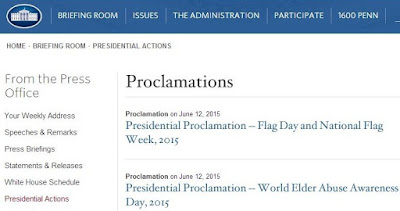 His most recent proclamation was on June 12 commemorating Flag Day and National Flag Week. I'd like the Confederate Flag removed from South Carolina's capital grounds and American and LGBT Rainbow Pride Flag lowered to half mast in honor the dead of Charleston.

Posted by Unknown at 9:58 PM
Email ThisBlogThis!Share to TwitterShare to FacebookShare to Pinterest