My latest public records request to Mayor Ed Lee related to his homeless Navigation Center and number of clients served and exited for various reasons, produced these numbers. 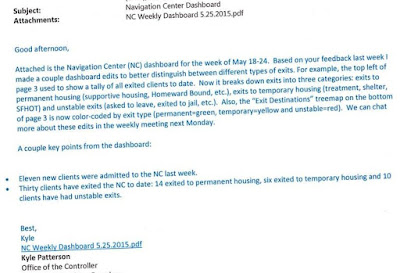 According to the Office of the Controller, thirty clients have exited the center located on Mission near 16th Street, 14 of whom exited to permanent housing, 6 to temporary housing and 10 have had unstable exits. Previous emails from City Hall showed some tenants residing at SROs were evicted so the City could lease those hotel rooms for homeless folks leaving the center.

The great unanswered question surrounding the Navigation Center is whether any actual new housing units were created, or is the City just shuffling folks from SROs and contracted beds so that the mayor can say he's moved homeless people from the streets to the center and then into permanent housing.

The grand total, since the center began operations in mid March, of all folks who've exited comes to thirty. 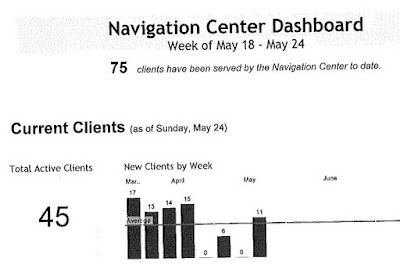 The cumulative number for all clients served since opening is seventy-five, which is the total capacity of folks who could reside at the center at the same time. At the end of may, there were forty-five total active clients.

I wonder if clients of the center, Mayor Ed Lee and Homeless Inc consider these numbers successes. What do you say about the mayor's latest stats?
Posted by Unknown at 12:34 PM
Email ThisBlogThis!Share to TwitterShare to FacebookShare to Pinterest