What Ever Happened to Joe Solmonese of HRC? 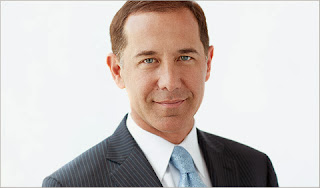 When I last thought about the Democratic Party hack who served for seven years as the president of the Human Rights Campaign, Joe Solmonese, it was back in February 2012. He had announced he would retire from HRC by the end of March last year and would be joining the Obama reelection campaign as one of 35 national co-chairs. Not more than a dime's worth of difference between his HRC and Obama duties, really.

The other day I learned that he went on to start a Washington-based corporate consulting firm and I wasn't surprised, given how much he sucked up to corporations and financial institutions for sponsorship of HRC dinners and lobbying efforts. A puff-piece that reads as if it came from Solmonese and his business partner, from Stuart P. Papavassiliou in the July 2012 issue of the ABF Journal, provides the background on Solmonese's  new endeavor:

Last April, the commercial finance industry learned that the venerable turnaround firm of NHB Advisors had been acquired by a newly formed corporate consulting firm bearing the name Gavin/Solmonese. While acquisitions of turnaround firms either in whole or in part have made industry headlines regularly this year [...] this announcement was a bit unique.

As it can sometimes happen, a chance meeting can be the first of a series of events that significantly impacts what comes later. In this case, attendance at a political fundraiser set Gavin/Solmonese’s formation in motion. Ted Gavin, principal at NHB Advisors and his wife were introduced to the work of the Human Rights Campaign (HRC) [...] In time, Gavin met Joe Solmonese, the then president of HRC at a fundraising event in Washington D.C. [...] That was in 2009.

For both Gavin and Solmonese, the conversations stepped up in January 2012, when the two began thinking about creating an opportunity to work together. The question became: how would the two achieve that goal? [...]

Solmonese, who at the beginning of June of this year left his post at HRC and today heads the corporate public affairs strategies practice for the new firm. [...]

Solmonese says, “Certainly our mission was straightforward as an advocacy organization fighting for LGBT equality, but one of the strategies we put in place — and I think it was quite brilliant although many people may not know about it — was to use institutional settings to accomplish the change we set out to accomplish. If we couldn’t change the laws, we could go into schools, hospitals, religious organizations and, of course, corporate America. [...]

Solmonese shares his partner’s excitement. He sums it up neatly: “At the end of the day, whether it’s having companies survive the economic downturn or getting corporations to provide a greater degree of equity for some segment of its workforce, or having that corporation take that practice and influence the external public policy conversation, it all comes back to the bottom line … and for us, that’s about helping corporations to be better, to do better and to be more profitable as a result.”

Is it too cynical of me to say that three years before he left HRC, Solmonese was laying the groundwork for his next career move - a move that was an extension of his tenure at the gay advocacy organization - to increase the profits of Corporate America by commodifying the LGBT community?

Check out all the high-price bankruptcy, crisis-management and other big league financial and political services Gavin/Solmonese offers. Solmonese never pretended to give a damn about the 99% and his new gig offers fresh evidence of his membership card in the 1%.
Posted by Unknown at 11:42 PM
Email ThisBlogThis!Share to TwitterShare to FacebookShare to Pinterest