Vote For Me in the Castro District 8 Race for Supervisor

After many dedicated years of avoiding mainstream politics - not running for any office or even a seat on our local HIV panels - I have had a change of heart. San Francisco, get ready!

In the spirit of neighborhood politicians like Harvey Milk and Sister Boom-Boom, I am tossing my hat into the ring. Specifically, I have filed papers to run for Supervisor for the Castro. Will the backbiting political machines be able to deal with me? Will they strive to again smear my reputation? Puh-leeze!

My goal is to help my neighbors, inspire like-minded lefty liberals and wage a fun and political campaign. Please join me in my quest to spread sunshine throughout the sometimes murky state of San Francisco politics! Michael Petrelis for Supervisor!!! 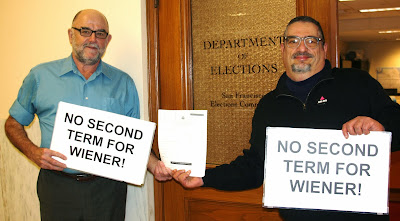 (My life-partner Mike Merrigan and I stood outside the Department of Elections office at City Hall on November 21, after I pulled the papers declaring my candidacy for Supervisor of District 8.) 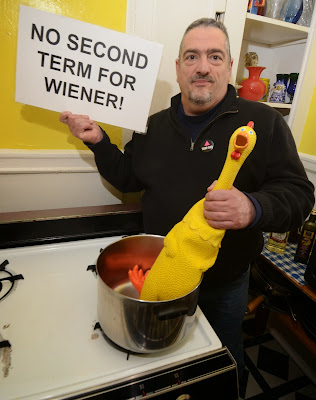 (If you vote for me, I promise to deliver a chicken in every pot and vegan voters will receive tofu burgers.) 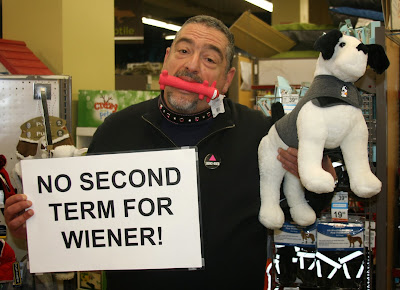 (As the underdog in the election, I'll bark a bit but won't bite anyone. Count on some tail-wagging too.)

A few areas of my concern should resonate with pockets of voters. I pledge to work for the following:

- Question time on a bi-weekly schedule for each Supervisor on an individual basis at City Hall and broadcast on SF Gov TV.

- Restoring a three-minute allowance for each speaker at public comment at weekly Board meetings.

- Taking public comment at weekly meetings at 3:00 pm, ending disrespecting the public with a guessing-game of when the taxpayers get to petition their Supervisors.

- Currently, the commissions for two City departments that eat up an enormous portion of the annual budget do not meet at City Hall nor are their meetings broadcast on government television. The Health Commission and the Fire Commission must hold meetings at City Hall and air them for the public on the web and TV. Following the money and machinations of two behemoth departments via public access cable and streaming should be equalized on par with that of the Entertainment Commission and the Taxi Commission.

- Amending the Nonprofit Public Access Ordinance of the sunshine code mandating four open board meetings at charities receiving $100,000 in municipal funds, creation of a City web site providing details about which agencies fall under the purview of the code, where and when they meet, and requirements the charities post meeting info on their sites.

- Let voters have the option of using one of our three options in election to vote for none-of-the-above in races for City offices. If the NOTA category garners more votes than a candidate, the candidate that came in second would win the election so as not to leave a seat empty.

We must move away from placing the burden of disclosure on members of the public, bloggers and reporters and expand City transparency to require regular unveiling of City-generated records of how our employees are allocating their time on our behalf and our dollars.

- If elected, I'll work to repeal the ban on nudity that stigmatizes people celebrating the beauty of the human body in all it's shapes, ages, tones, colors and genders. I favor making Jane Warner Plaza a clothes-free zone.

- Further, I'll advocate for opening public parks to all citizens 24 hours a day, 7 days a week.

- Additionally, I want to return the entire Harvey Milk Plaza to the public and remove sole control of this historical piece of municipal property now in the hands of the GOP members of the Merchants of Upper Castro/Market.

- We need to establish a committee comprised of staffers from the Department of Public Work, LGBT activists and area businesses and homeowners that jointly controls the rainbow flag and pole at the plaza, which shall be used for responsible political and cultural activities.

- Merge the HIV Prevention Planning Council and the HIV CARE Services Council into one decision-making body and putting the needs of people living with AIDS first.

- Urge the Department of Public Health to offer food and travel vouchers to clients of HIV/AIDS agencies.

- Develop asset-based social marketing campaigns that recognize and celebrate the longtime survival of HIV positive and negative gay men over 50 years of age.

- Convene an AIDS Accountability Summit to examine salaries of nonprofit HIV agencies, overhead costs of fundraisers, percentage of poz people on boards of directors and leadership positions, effectiveness of prevention and care services, and planning for reduction of government grants.

Voters of San Francisco's District 8, I ask for one of your three votes on November 4, 2014.

You can count on my vote

I love you and I love your platform and agree that Scott Weiner must not get a second term! Sadly, I am not in D8!

Hello Naked Kevin, I look forward to November 4, 2014, and receiving your vote on that election day.

Hi VCDiva Veronika, You and your hubby should move into the district so you can vote for me!

Dear Angela, Thanks for the support and love.

Go Mike Petrelis! Tell the other Mike that I just read his dad's obit in the Plain Talk. I used to walk beans for Mike's younger brothers in Vermillion! Did not know there was an out and proud Merrigan! Wishing you both the best!