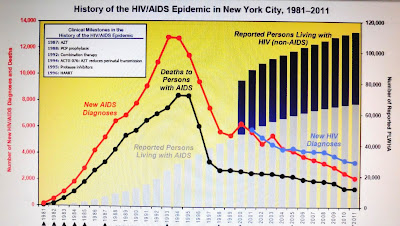 Tomorrow is Sunday, December 1, which is World AIDS Day and that means it's time for bashing gay men, young ones in particular, and shoveling doom-and-gloom reports and statistics down people's throats, and generally failing to acknowledge advances since the 1980s and the valor of longtime AIDS survivors.

Writer Michael Specter of the New Yorker magazine has penned a prime example of the kind of World AIDS Day essay editors and directors of HIV prevention groups and researchers adore, titled "What young gay men don't know about AIDS".

I'm not saying there is no reason to be concerned about HIV transmissions in any population, but when health authorities and the press annually cry AIDS wolf and the umpteenth second wave of the plague, the alarmist message is tuned out. And yes, there is a vital need to acknowledge the historical and current contributions of homosexuals in controlling and contending with AIDS.

From the start of his essay, Specter is out to remind us of what he saw during the plague years with a nostalgic air hanging over his every word:

I used to keep a picture on my desk, taken on Castro Street, in 1983, at the moment when it seemed as if gay life in San Francisco was ending forever. There were two men in the photograph: the first, tall and gaunt, was leaning over the other, who was in a wheelchair, tucking a blanket around what little was left of the wasted man. [...]

The Castro was lined with thirty-year-old men who walked, when they could, with canes or by leaning on the arms of their slightly healthier lovers and friends. Wheelchairs filled the sidewalks. San Francisco had become a city of cadavers.

Yes, those were horrible years and the dying all around us was a terrible thing to bear witness to and fight against, but what does this heavy-handed emotional look back have to do with reaching young gay men today and why does Specter think such dramatic language will have meaning for young gays?

In 2002, while writing a Profile of Larry Kramer, the dark prophet of the American AIDS epidemic, I spoke to Tony Kushner, who received a Pulitzer Prize for his brilliant play about that time, “Angels in America.” [...] 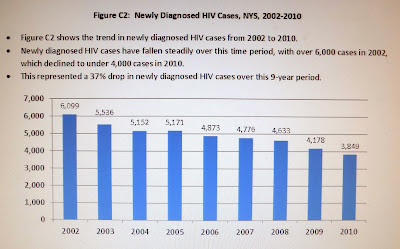 Then people began to combine crystal with Viagra, and a new surge of infections began.

What does Specter propose be done today to reverse what he says is a resurgent epidemic? Homosexual historical fear:

Can we halt this epidemic once again? Of course, or at least the dangers can be greatly reduced. [...]

The only appropriate conclusion here is to listen, again, to Larry Kramer’s warning. What was true in 1983 may well become true again. “If this article doesn’t scare the shit out of you,’’ he wrote in “1,112 and Counting,” “we are in real trouble. If this article doesn’t rouse you to anger, fury, rage and action, gay men have no future on this earth. Our continued existence depends on just how angry you can get… Unless we fight for our lives we shall die.”

Reading Specter I heard coded dog-whistle message of nostalgia for the bad old days of gays dropping like flies in San Francisco and New York City and other places. Has he never heard of post- and pre-exposure prophylaxis, and other new methods of HIV prevention?

Specter and everyone else would greatly benefit from reading longtime AIDS survivor Mark S. King's fantastic essay "Stop bludgeoning young gay men with our AIDS tragedy", because he makes so many necessary and realistic points about HIV today and prevention that works:

Plenty of us are more than happy to rob graves, however, in an attempt to frighten gay men into certain behaviors. This kind of horror-by-proxy happens all the time. Concerned that misguided gay men of a certain age hear whatever the latest HIV infection rates are, and the pull out the AIDS Crisis Card.

"If their friends died like mine did, maybe they would think twice before having sex without a condom," goes a typical remark drenched in self-pity and tenuous logic. [...]

The 1980's are history. They are not a prevention strategy.

Michael Specter has a lot to learn from Mark King's wisdom.

Plenty of us are more than happy to rob graves, however, in an attempt to frighten gay men into acceptable behaviors. This kind of horror-by-proxy happens all the time. Concerned but misguided gay men of a certain age hear whatever the latest HIV infection rates are, and they pull the AIDS Crisis Card. “If their friends all died like mine did, maybe they would think twice before having sex without a condom,” goes a typical remark, drenched in self pity and tenuous logic. The 1980′s are history. They are not a prevention strategy. - See more at:
Posted by Unknown at 8:45 PM
Email ThisBlogThis!Share to TwitterShare to FacebookShare to Pinterest