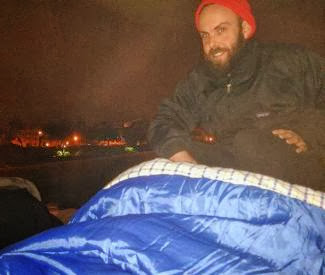 (The handsome and furry Tom Temprano, w/o a sign, climbing into a sleeping bag in October. Credit: Joe Fitzgerald Rodriguez, Bay Guardian.)

After more than three decades of existence, I would think the Harvey Milk Democratic Club of San Francisco would have learned a few professional tricks of the activism and advocacy trade, but after their recent camp-out in Dolores Park I was reminded of how it's amateur time when they organize public actions.

The club's president Tom Temprano pulled together the October 28 park protest in an effort to stop proposed legislation by the Castro's member of the Board of Supervisors, that would close public parks at night. As far as I can tell, the club solely focused on the negative impact of the law on homeless folks, fair enough, and said nothing about homo sex cruisers who are in the public parks after midnight, needed highlighting, in their written materials:

Join us for a sleep-in in one of the finest parks in Supervisor [redacted] District, Dolores Park, as we take a stand against the attack on homelessness, the attack on public access to public spaces and the attack on the San Francisco we have come to know and love. Bring a sleeping bag, a protest sign and a piece of your mind.

I went to the event in solidarity with ALL populations affected by and opposed to the legislation, and hoped for a few moments of satisfying organizing and rallying. Should have known that being told to schlep a sign to it was an indication that the protest was not well-organized in terms of messaging, and a too-cool hipster attitude of it's enough to be present, don't bother with effectively using the media with effective visual signage.

We stood around, activists and various media folks, waiting for word about any plan of action and thirty minutes after the appointed starting time, Tom gathered everyone together and he and few others spoke. Ok enough, but I had expected a more solid presser with speakers ready and able to explain how the law would and could be stopped, and what the club was planning to deny the Castro supervisor a second term.

At the Supervisors' meeting on Tuesday, the nighttime park closure legislation passed and now awaits the signature of Mayor Ed Lee making it a new law. 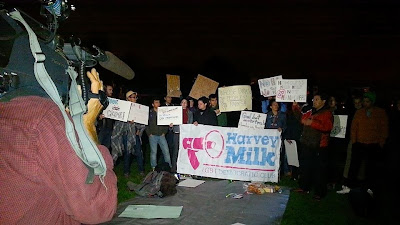 (If you can read the homemade paper signs, please tell me what they say. Credit: Trey Allen, Castro Biscuit.)

The Milk Club does want to get a new District 8 supervisor, right? After three years of the current seat-holder polarizing his district, the LGBT community and the City? Yes? Well, I sure as hell didn't get that impression at the park protest and don't see the club's leaders and members seriously laying plans to elect a progressive to Harvey Milk's old seat at City Hall.

At the club's annual Harvey Milk/George Moscone candlelight vigil in November 2011, after eleven divisive months and much kowtowing to business interests, not to mention much anger and consternation and opposition at the club, Supervisor [redacted] was given mic-time at an event totally controlled by the club. He faced no social and political opprobrium for his infuriating short time in office, which included siding with MUMC to deny the public access to the rainbow flag pole at the former public Harvey Milk Plaza.

I won't be surprised when the supervisor again speaks at the Milk Club's vigil on November 27 at Harvey Milk Plaza, just as I am not surprised that the club never kept it's promise to advocate to reclaim that plaza and equal access and community control of the iconic flagpole. 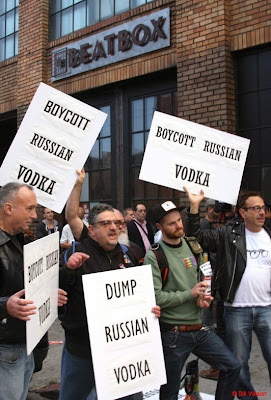 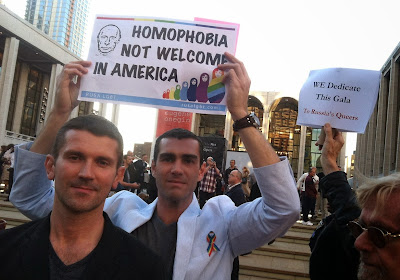 These three gay Russia related photos amply illustrate what professional, targeting and effective activist messaging is all about. Posters that clearly spell out a to-the-point message in the photos, that don't require a detailed caption to explain the photo and the people are calling attention to.

They same should be said about the Milk Club signs at the park protest and the images that got into the press and on blogs.
Posted by Unknown at 6:28 PM
Email ThisBlogThis!Share to TwitterShare to FacebookShare to Pinterest