It's been ages since I attended an AIDS scientific conference and the reason why I'm attending the What Will it Take to Achieve an AIDS Free World meeting that started yesterday, Sunday, November 3, in San Francisco, has everything to do with the fact that it is in my backyard. I just peddled down to the St Francis Hotel on my bike, received my blogger credentials and took a seat in the first row within three feet of a microphone.

The conference is jointly sponsored by Cell and the Lancet, and more information about it is here. 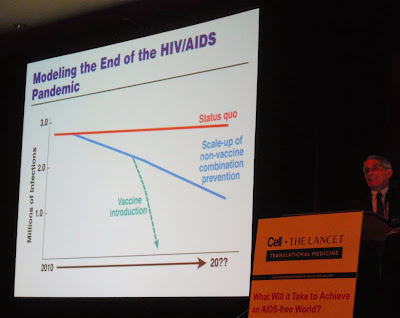 The keynote speaker was National Institute of Allergy and Infectious Diseases director Dr. Anthony Fauci. I comprehended the first section of his presentation and the general overview of ending HIV/AIDS laid out for us in slides, several of which showed the global decline of HIV infections.

In this photo, Tony shows us the slide with current HIV infections worldwide represented by the red line, the blue line shows how the rate would drop with the scaling up of a combination of prevention methods (primarily the treatment-as-prevention approach), and a dramatic plummeting of new HIV infections with an effective vaccine, should it become available, with the green line.

The brown line at bottom is for years, starting on the left with 2010 and proceeding to 20??. Some chuckled when he called attention to the lack of an end year. I believe the blue line is a feasible possibility, but don't expect the vaccine is a realistic option within our reach.

On the left is researcher Dr. David Baltimore, from Caltech and a Nobel Laureate, posing with Mary Beth O'Leary who is handling public relations for the conference and Tony.

When the floor was opened for general questions, I went to the mic and said there's been complaining from Bay Area people living with AIDS that we hadn't been adequately invited to participate in the meeting. Since PWAs are a key component to controlling, preventing and eventually ending HIV, the should be a panel comprised of PWAs and our voices heard on what it will take to create an AIDS free world.

Panelists agreed that engaging poz folks is important and every presenter expressed thanks to the PWA volunteers in their studies, verbally and in their slides. That gratitude is much appreciated but it's a shame the San Francisco area, with thousands of people living with HIV and many of whom have great insight to contribute to research and the conference, have not been adequately involved with the meeting. 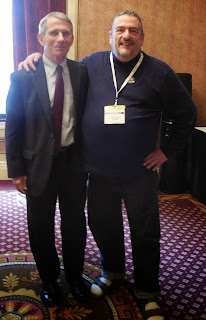 Mary Beth arranged some private time for me with Tony, so I could ask him to address on video (see below) the declining HIV diagnoses in New York City and the stable-to-declining diagnoses in San Francisco.

After our chat, I mentioned that I recently heard our mutual friend Larry Kramer was residing in an assisted living facility in New York City and Tony said he was one of Larry's caregivers, and that he had recently visited with him.

It was surprising to hear him tell me this because given all of his duties as head of NIAID, including the huge amount time he spends traveling to and presenting at scientific meetings, I wondered how he carves out time on his schedule to see and assist in caring for Larry. Good to know Larry is receiving top-flight medical attention! 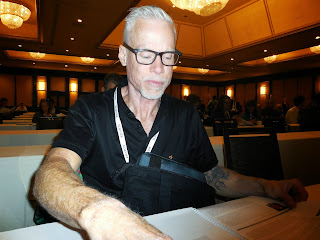 Here's my friend from the old ACT UP/Golden Gate chapter and fellow person living with AIDS Matthew Sharp. He now works for Project Inform, one of the few locally based AIDS organization involved in the conference. Project Inform's David Evans is on panel scheduled for Tuesday afternoon. Matthew will be writing about this conference for the HIVandHepatitis.com site.

[CORRECTION: Matt was laid off from Project Inform a few years ago. Apologies for the error.]


Check out this video of Tony answering my questions about NYC's declining HIV cases and the endemic phase we're experiencing in SF. After listening to his formal presentation and chatting with him one-on-one, I wished that more PWAs could have heard his presentation and also had the chance to engage with him. Maybe the next time he's in San Francisco a town hall meeting can be organized with him. 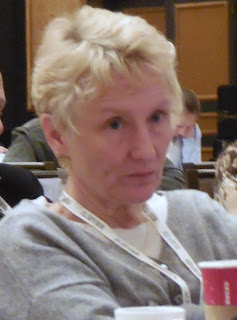 Among the attendees is UCLA's controversial and arrogant math modeler Sally Blower. She has a seriously tattered reputation in San Francisco and beyond because of her alarmist and questionable January 2010 article in Science, regarding transmission of drug-resistant HIV strains. Our local gay newspaper the Bay Area Reporter said at the time:

A study [from Sally Blower et al] predicts a "wave" of HIV drug resistant strains "will emerge over the next five years in San Francisco due to transmission from untreated individuals." But it's questionable how much cause for alarm there really is. [...]

"If the resistant strains we have identified in our analyses evolve in these countries, they could significantly compromise HIV treatment programs. Consequently, currently circulating NNRTI-resistant strains in San Francisco pose a great and immediate threat to global public health," the study said.

But Dr. Grant Colfax, the city's HIV prevention director, told the Bay Area Reporter, "At this point, HIV drug resistance is not a public health crisis. The sky is not falling."

When you have Colfax, who now serves as President Obama's AIDS Czar, along with activists, politicians and local media outlets, all deeply concerned with gays, people with AIDS and transmission matters all in agreement that Blower's modeling is faulty, you might expect the researchers to respond to our concerns. Blower and colleagues avoided the media and never held a community meeting over the controversy and stigma they created against PWAs.

For an excellent review of the 2010 false alarm created by Blower and its fallout, read activist Clinton Fein's essay in which he dissects the modeling, UCLA's p.r. department and Blower's arrogance. Activists, whether poz or negative, need to keep tabs on researchers and remember where we have come from in fighting AIDS, as we move into the future.

The conference continues today and I'll be back there for the afternoon sessions.
Posted by Unknown at 11:36 AM
Email ThisBlogThis!Share to TwitterShare to FacebookShare to Pinterest

Good that you could make this. These conferences are usually really interesting. As Peter has observed all is not quite as rosy in the garden with MSMs in NYC and certainly not in London where as I said there have been a steady rise in infections within the past 10 years or so.
That said you are quite right to challenge the scaremongers. They are seriously irresponsible and cause a lot of harm (not just among scientists among some in the gay press too). Mostly interested in drawing attention to themselves than helping the situation IMHO. Good to hear that this conference did not indulge in that.