The Cell and Lancet's conference asking What will it take to achieve an AIDS-free world concluded yesterday, Tuesday, November 4, here in San Francisco and after attending it over three days believe it was well worth my time to participate in the discussions and hear what the researchers had to say about ending AIDS. A huge downside to the meeting was dearth of people living with HIV and AIDS. We are key to managing and ending the epidemic and it's not enough to include Timothy Ray Brown, the "Berlin patient" cure of AIDS and a San Francisco resident, a good guy too, as a guest speaker at the conference dinner.

The highlight of yesterday, indeed the conference, for me was spending half an hour chatting one-on-one with Eunice Casey, director of AIDS services for NYC's Health and Hospital's Corporation about her 6-year study looking at testing numbers in the City's healthcare system in the context of test-and-treat goals.

Eunice confirmed that both the number of newly diagnosed HIV patients, 589 six years prior and then 372 in 2012, and number of concurrent diagnoses, 190 down to 94, were declines and that this is a good development. She agreed that declines in these categories added to our understanding of the drops in new HIV diagnoses across New York City, as reported in the October 2012 semi-annual report from the Department of Health.

Our conversation reminded me of the importance of participating in AIDS conferences, just on the level of delving deeper into research of all sorts in real-time and face-to-face, and because researchers have their work closely scrutinized by PWAs and activists trying to fully understand the findings and using them in our advocacy or healthcare decisions. 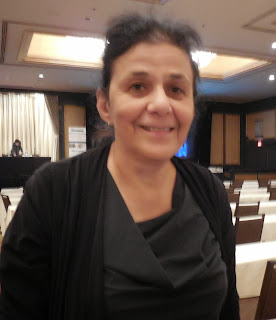 One of the presenters on Tuesday was Wafaa El-Sadr of Columbia University and I pressed her, along with practically every person I spoke with, to make sure people with HIV and AIDS were fully involved participants in planning and convening of future conferences. I told attendees they had a duty to ask meeting organizers if PWAs were on the organizing committee and on panels and invited to attend. Not one disagreed with me and I hope they keep their promises to address these concerns of mine. 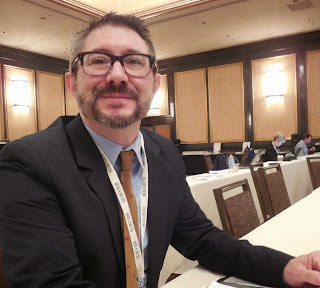 This is David Evans of Project Inform, before he joined an afternoon panel. He disclosed to me that he is HIV negative and fully endorsed my calls for PWA engagement. When he spoke on the panel, he made mention of the lack of a poz person on the organizing committee and I'm grateful he used some of his mic-time on the topic. 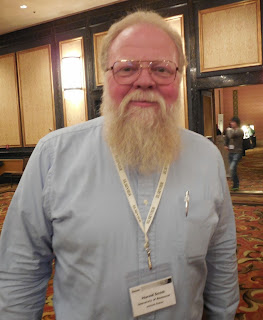 During the lunch break, Harold C. Smith of the OyaGen research company based in Rochester, New York, looking at enzyme-based therapy for PWAs, come over and introduced himself to me. I got a bit lost as he spoke about the science of his research, but it sounds exciting for extending the lives of poz folks. 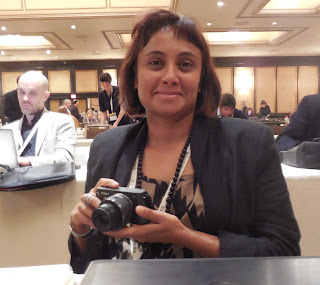 The award for conference shutterbug goes to Pam Das of the Lancet. She sat to my left in the front row, directly in front of the lectern where the presenters stood, and when she wasn't scribbling notes on a paper pad, she was snapping photos. I wonder if she got a pic of her boss, Lancet editor Richard Horton, without his tie during yesterday's morning session because I didn't. I believe it's an international law mandating the Lancet editor, heck, all editors of medical journals, are required to wear a conservative business suit and necktie. Right? ;-) 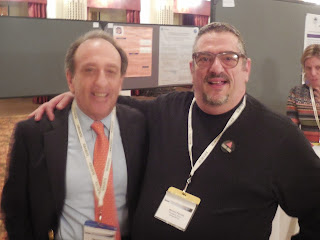 As if it's not enough to ruin my reputation getting a photo of me with Tony Fauci, I further sullied my good radical standing with this image of me with Dr. Jay Levy of UCSF. "Your reputation ruined? What about mine?" he asked.

Jay was in charge of the panel about health risks to longterm survivors of AIDS, and unfortunately he didn't agree to my request that I be added to his panel which lacked a PWA. Yes, I think he was nervous about putting me on the panel, but before it began he and public liaison Mary Beth O'Leary said they would make sure I was the first at the mic for Q&A.

Well, I was gathering my notes when another attendee got to the mic and made his statement with a question! Shrugging my shoulders, I smiled at Jay and waited my turn like everyone else.

I spoke about contracting regular pneumonia in April 2012, despite keeping my end of the bargain with science to be treatment adherent, get regular blood draws and see my doctor, and maintaining good numbers. "But science didn't keep it's part of the bargain and prevent me from contracting the infection!" Mentioned my recent episode with Bell's palsy and said between the HIV and aging problems, I also contend with normal aging health issue.

As I and other PWAs live longer we not only need to maintain wellness with AIDS cocktails, but that researchers and doctors have to remember we require lots more alternative treatments to manage the stress of the health-setbacks but also the mental issues that are part of our lives.

My conclusion said in San Francisco too many gays with AIDS in the Castro and city-wide were dealing with the eviction epidemic, and that there is much anxiety about losing our housing. I asked everyone to Google for more info about the gentrification affecting PWAs here. I also said all longterm AIDS survivors and negative and poz gays over fifty, especially those of us from the ACT UP movement, need a pat on the back for surviving and changing the world.

Jay said very kind words about my participation and led folks in a nice round of clapping for my advocacy, and I felt the applause was also for ALL of the folks I cited as needing that pat on the back.

Also speaking at the mic was fellow longtimer Matt Sharp, and he beautifully added context to what I said. Matt reminded us about our gay brothers ending their lives and committing suicide from the 50-year-old-plus generation, that many local PWAs are experiencing isolation and that there is the welcomed development of a grassroots network in San Francisco of longtimers coming together and organizing.

Thank you, Matt, for adding your voice and specific comments. 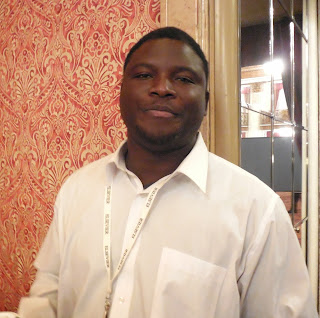 I struck up a conversation with Govina Mayaba from Weber State University in Utah, and he had lovely lilting cadence to his speech that was clearly not American. Turns out he was born in the West African nation of Ghana and this was his first visit to San Francisco. When I asked if he had time to be bad and enjoy some fun time here, he smiled and said no. Govina walked across the Golden Gate Bridge and went to the beach to enjoy the sand and the ocean. 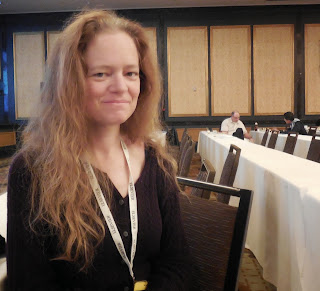 This lass is Erin Allday from the San Francisco Chronicle. She was dipping into the conference for future stories and won't be writing about it. I made her laugh as I spoke about my happiness hearing Connie Celum talk about Tenofovir rectal gel research, as I cooed the words.

Since I didn't get the change to say it during the three-days of the conference, lemme get it out now: ACT UP! Fight back! Fight AIDS!
Posted by Unknown at 12:41 PM
Email ThisBlogThis!Share to TwitterShare to FacebookShare to Pinterest