If there is one rule of public service San Francisco City Attorney and political animal Dennis Herrera has learned from former Mayor Willie Brown it is never write anything down, that way nothing damaging can be traced directly back to you.

After reading a few months worth of emails between the city attorney's officer staffers and Jo Becker, the author of the controversial gay marriage book "Forcing the Spring", and her publicist at her publisher Penguin Group, I am not shocked that not is from Herrera himself. Brown taught him well.

I give New York Times reporter Becker major credit for asking Herrera to turn his City Hall office and numerous staffers into her San Francisco publicists, and having no problems having them serve her commercial needs to increase profits from the promotion and sale of her book.

My public records request to Herrera produced 52 pages of emails up to April 16 (I expect to receive more since my request extended to all docs through May 5), list of invitees to Herrera's May 1 wine-and-cheese City Hall reception for Becker (no one from the Board of Supervisors or their staffs, nor the Mayor and his people too), and Herrera's calender. Let's go over those of keen interest.

This whole sorry episode of our City Attorney jumping high to assist Becker began when she wrote to deputy staff attorney Therese Stewart, who comes off quite favorable in "Forcing the Spring" as does her ambitious boss. Becker suggested on January 12 that an event be held at City Hall, Stewart thought it a good idea and told her to contact Herrera's confidential aide. 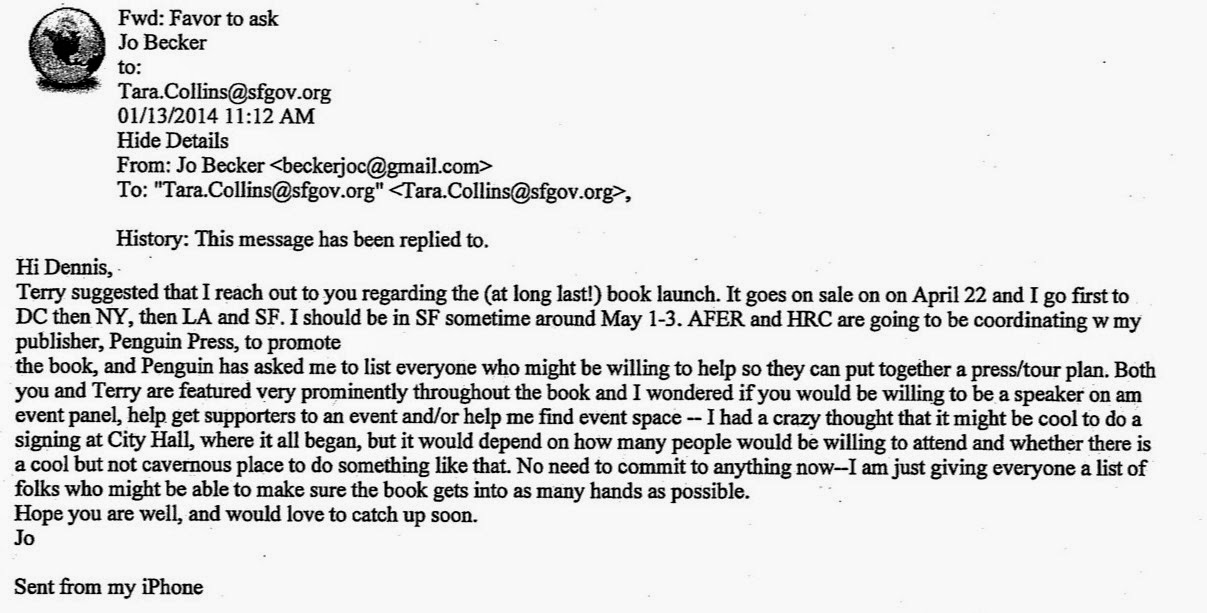 On January 13, Becker wrote to Herrera via his aide with the City Hall event idea and mentions that "AFER and HRC are going to be coordinating with my publisher, Penguin Press, to promote the book and Penguin has asked me to list everyone who might be willing to help so they can put together a press/tour plan."

How nice of the American Foundation for Equal Rights and the Human Rights Campaign, two arms of Chad Griffin Inc, to get in bed with Penguin Press and help Becker earn a few kopeks.

What all of this has to do with official City Attorney business is never laid out. Everyone seems to be on the same page about using City Hall and taxpayer-funded public employees on City time using City infrastructure (computers and other communication tools) to aid in a commercial venture for a New York Times reporter, and it will all add up to more shine for Herrera's gay marriage halo.

Did alarm bells go off in Herrera's head? Nope, later on January 13 his confidential aide told Becker "that he was happy to help in any way he can. He already has a few things he do to support you and your book. If you'd like to set up a time to talk to Dennis about those ideas, let me know."

It's of no benefit to us, the people of San Francisco, to have Herrera offering this assistance and also making time available to really get in sync with Becker's PR plans. So much for ethics on his part.

Then on March 15 Becker emailed Sarah Hutson, the publicity director for Penguin, detailing how Herrera and Stewart "have kindly offered to do a book event" at City Hall. Becker suggests maybe "we could also invite Judge Walker and do some sort of discussion that could generate coverage in the SF Chronicle?" She goes on to hawk her book in bulk and provides details about discounts for volume purchases. Clearly Becker has no qualms about using San Francisco public servants to expand her bank account. Why should she, when those public servants are more than willing to provide free PR for her? 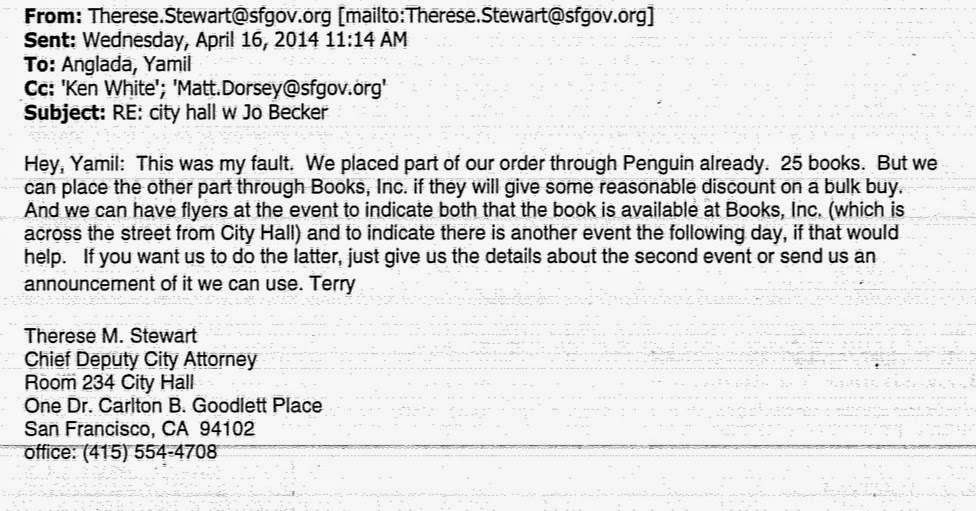 A month later on April 16, Stewart writes to another Penguin publicist, Yamil Anglada about bulk book purchases, and offers to assist in promoting another Becker event at the local Books Inc outlet near City Hall. Is there any PR help the City Attorney and his staff didn't offer the New York Times reporter? 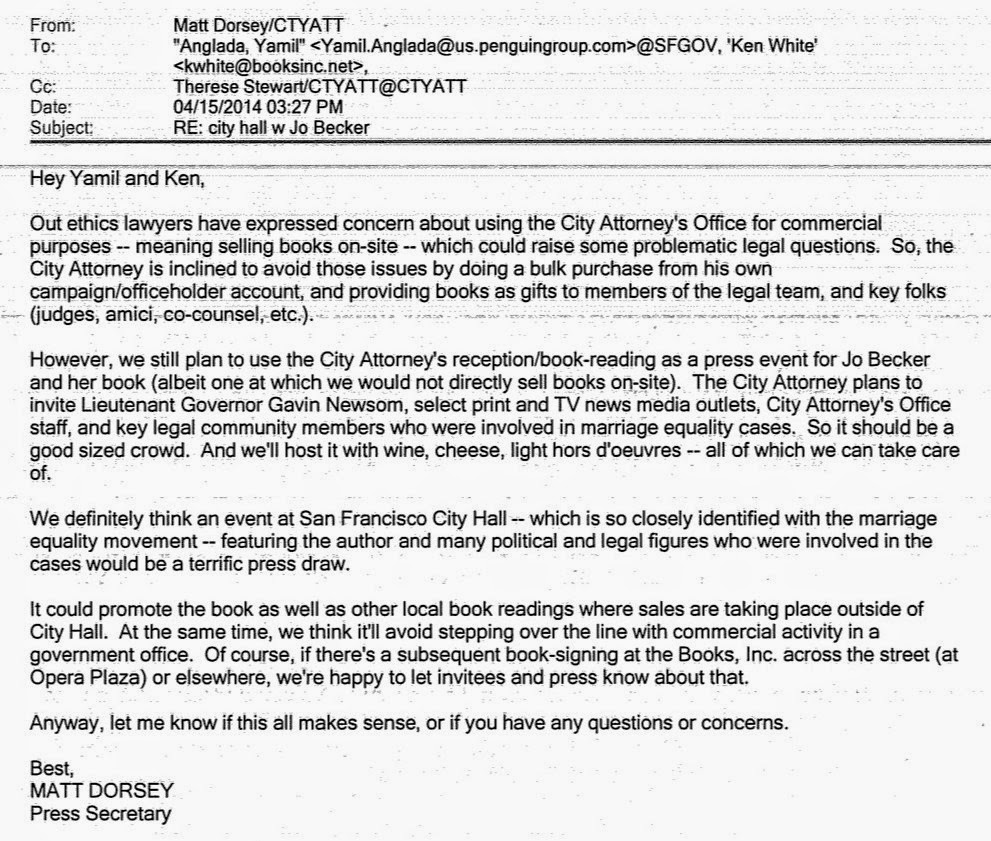 The day before Stewart sent that note, Herrera's top staffer for publicity Matt Dorsey finally raises some ethical concerns but ways are explains to get around them. Not only that but Dorsey shares info about Herrera's plans to invite Lt. Gov. Gavin Newsom to the May 1 reception and inviting only "select print and TV news media outlets". So much for equality and putting on an event open to all media folks and even those pesky persons, what are they called again, oh, yes, the taxpayers of the City whose seat of government is being turned into a stage for a commercial photo-op, all of benefit to just one man -- Herrera.

Given the devastating lack of accountability at San Francisco's City Hall, I don't expect anyone under the dome to give a damn that we, the people, have been taken advantage by Herrera. Well, at least Becker got excellent PR out of him and the City Attorney's office.
Posted by Unknown at 11:21 PM
Email ThisBlogThis!Share to TwitterShare to FacebookShare to Pinterest