A reminder that I am running for the District 8 seat on the Board of Supervisor with a transparency agenda to shine much-needed light on the behind-the-scenes activities of City Hall public employees. Please like my campaign Facebook page, make a donation via PayPal using the Petrelis4Sup2014@aol.com addy or mail a check to Petrelis 4 Supervisor 2014, PO Box 14943, SF, CA 94114.

Previous posts in my effort to hold the City Attorney accountable for his role in using City infrastructure and City employees' time to promote Jo Becker's book are here and here and here.

Thanks to a public records request to San Francisco City Attorney Dennis Herrera, I've received a 110-page PDF containing new emails revealing how many public employees, the large amount of time they devoted to coordinating with Becker on behalf of her controversial book "Forcing the Spring" and the lengths deputy attorney Therese Stewart went, on City time, to use her legal contacts to benefit Becker.

Time sheets for Stewart indicate that on April 10, 15, 16 and 21 she met with Herrera and/or his staff publicists Matt Dorsey, Gabriel Zitrin and Jen Drake to discuss the May 1 book reception they organized for Becker.


Showing just how tightly Stewart and Becker were working together crafting a mutually beneficial event, Stewart on April 11 emailed the New York Times reporter at two of her addies including the one at the paper, asking her look at Herrera's draft invitation and to get back to her if Becker was "okay with it". Great. This deputy City Attorney is providing free public relations services to Becker and asking her to approve a public document taxpayers are footing the bill for.

With no ethical qualms from Becker, four minutes after receiving Stewart email, she forwards it to a Penguin publicist asking, "[C]an you take a look at the draft invite Terry's press person put together and help put it into the template you came up with for [the Book Inc event in San Francisco], along w using some of our press release language and blurbs? I'd be hugely grateful. Terry and Dennis will take care of sending them out etc but I think we should be consistent with the language across the board".

Do the New York Times managing editor and publisher know Becker was coordinating all this from her addy at the paper? If they do, is anyone at the Gray Lady concerned?

It makes my skin crawl to know this journalist has the City Attorney and his deputy wrapped closely around her finger and ready to do all they can, with City infrastructure, to help promote her book and that none of this is PR work of any direct benefit to we, the people of San Francisco. 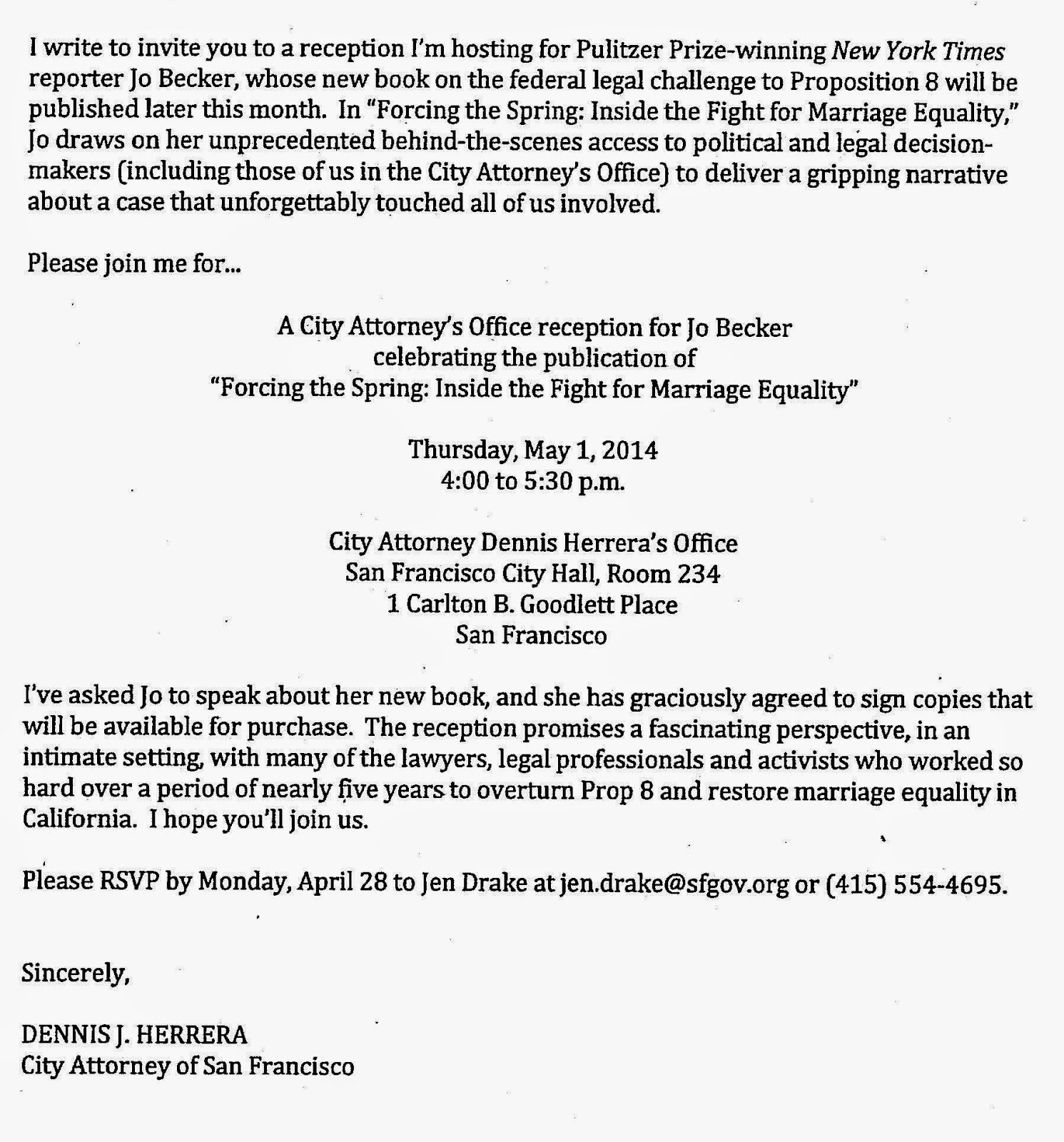 This draft invitation mentions that Becker's book was originally going to be available for purchase. Jeez, with all the smarty-pants people in the City Attorney's office, it's shocking to see that at the get-go on the invitation there was every intention to use City Hall to assist Becker in making a few bucks.


Herrera's top staff publicist Matt Dorsey on April 16 asked a Penguin PR person about other Becker readings in San Francisco and whether reporters were being invited to those events. He says his concern is making sure the City Attorney is not stepping on other PR efforts. Sure sounds to me more like Dorsey wants to hog as much media as possible for his boss's reception.


When the story broke on April 17 that the defender of Prop 8 in the litigation, Charles Cooper, views on gay marriage were evolving and controversy over the book was flaring up, Becker reached out to Stewart wanting a phone chat. Stewart replied with a window of time when she'd be available to talk. Quite a cozy relationship here.


The next day, April 18, Becker wondered to Stewart if Herrera's copy of her book had arrived and she asked a Penguin publicist to check in to it. Nice to know she was eager to get her source a copy of her book. Couldn't he just walk to a nearby book store?

On April 25, Stewart emailed retired Judge Vaughn Walker's assistant at his new place of employment, the Federal Arbitration Inc agency, asking whether Walker "will be attending the book signing on May 1st and, if so, whether he would be willing to make some brief remarks about his role in the historic case. The author, Jo Becker, specifically suggested that we him to say a few words, which we though was a terrific idea".

WTF? While being paid by we, the taxpayers, Stewart is carrying Becker's request to Walker and attempting to get him to appear at a photo op, one that if he did attend (and he skipped it, btw) would have brought quite a large media turnout and likely increased profit for Becker and her publisher, and given Herrera great news clippings. 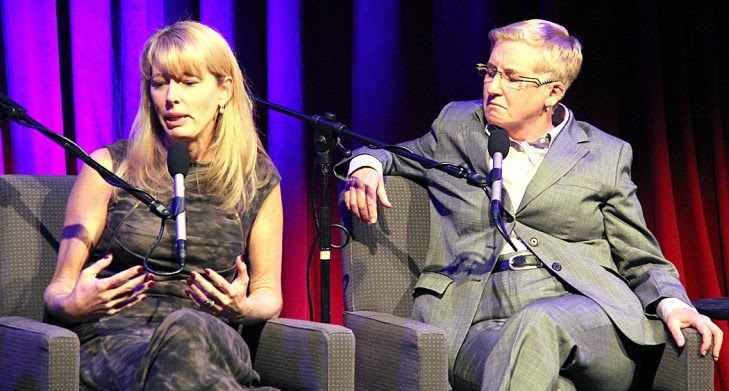 Apparently off the City clock and on her dime, Stewart flew down to Pasadena to appear with Becker for a panel discussion about the book on Southern California Public Radio station KPCC on April 28. Is there anything Stewart and Herrera and their office didn't do on behalf of Becker? 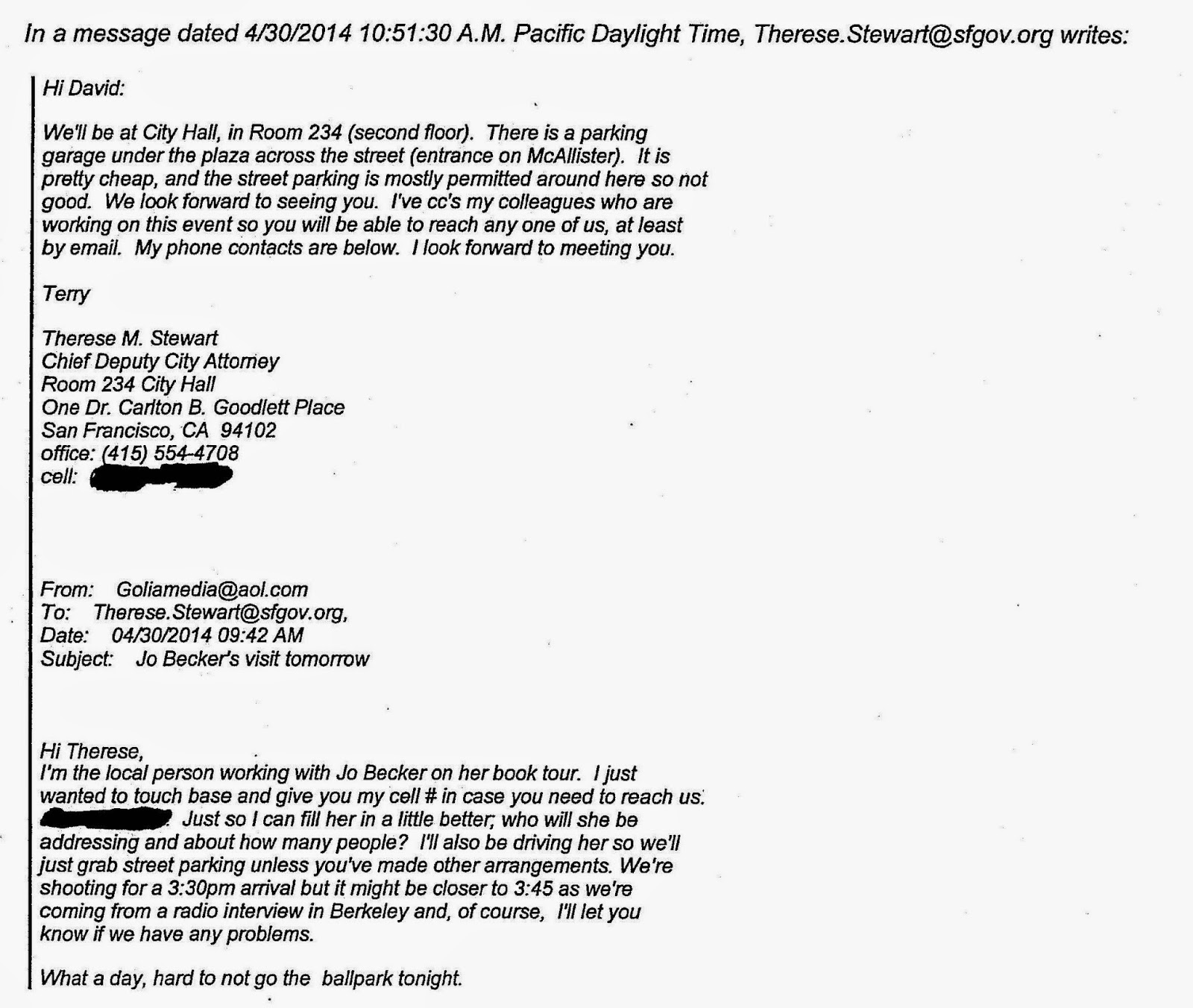 As if three City Attorney staff publicists and one from Penguin weren't enough to help get the word out, there was also a local publicist named David Golia pitching in, and of course Stewart was coordinating with him too as this April 30 email illustrates.

I've found only one story just on the reception that took up so much City Attorney staff time, and that was from KQED, and then Matthew S. Bajko mentioned it in passing in a story about Becker signing books at a Ferry Building book store. Herrera and Becker sure as hell didn't get much bang out of all their efforts, did they?

This May 5 book signing and cocktail reception for Becker at the Los Angeles home of AFER board members Rob and Michele Reiner, which was from 6:30 pm to 8:00 pm, was not listed on Stewart's official work calendar. However, the email from the Reiners' to her announced they were thrilled that she would be at the event.


And where in the world, according to his official work calendar, was San Francisco City Attorney Dennis Herrera on May 5? Why, down in Los Angeles.

He lists two official meetings, one with that city's city attorney and mayor, but notice that from 4:00 pm to 9:45 pm Herrera's calendar is blank. Hmmm, do you think he was with Stewart at the Reiner's home celebrating Becker and her book? Is the San Francisco ignoring the numerous ethical breaches here? You betcha.

I sure hope Herrera and Stewart's day jobs have not gotten in the way of their unstinting and tremendous PR work on behalf and in glorification of Becker and "Forcing the Spring".
Posted by Unknown at 12:19 AM
Email ThisBlogThis!Share to TwitterShare to FacebookShare to Pinterest