All of Chad Griffin's Emails Released by SF City Attorney

Something just doesn't smell right that there are so few emails in this matter. My public records request to San Francisco City Attorney Dennis Herrera was for any and all correspondence between anyone in his office and Chad Griffin, a man who wears several gay hats, from the start of 2008 through last week.

In 2008, Herrera hired Griffin to provide political and fundraising advice to his independent state committee against Prop 8 and from 2009 the City was a litigant with Griffin's American Foundation for Equal Rights in the Perry case. I would have expected dozens, if not hundreds, of emails flew back and forth between Griffin and the City Attorney's office over the years about media, legal and political strategizing, but my assumption was incorrect. 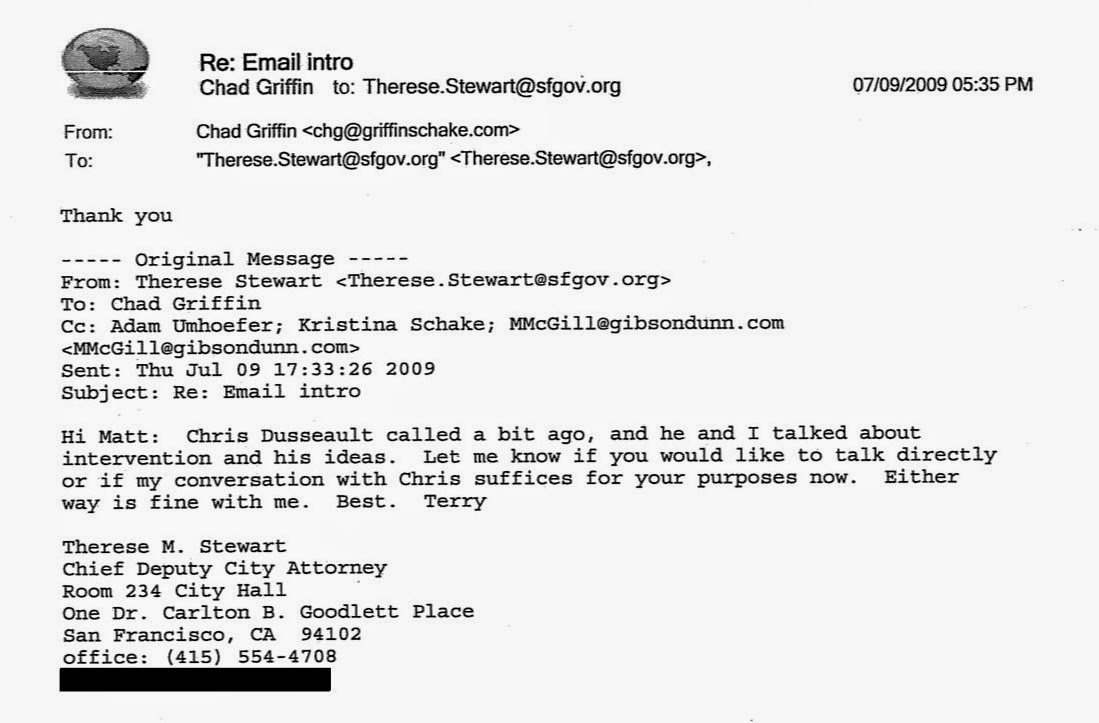 Around a dozen emails from Griffin were released and include some like this, with simple notes from him in July 2009. 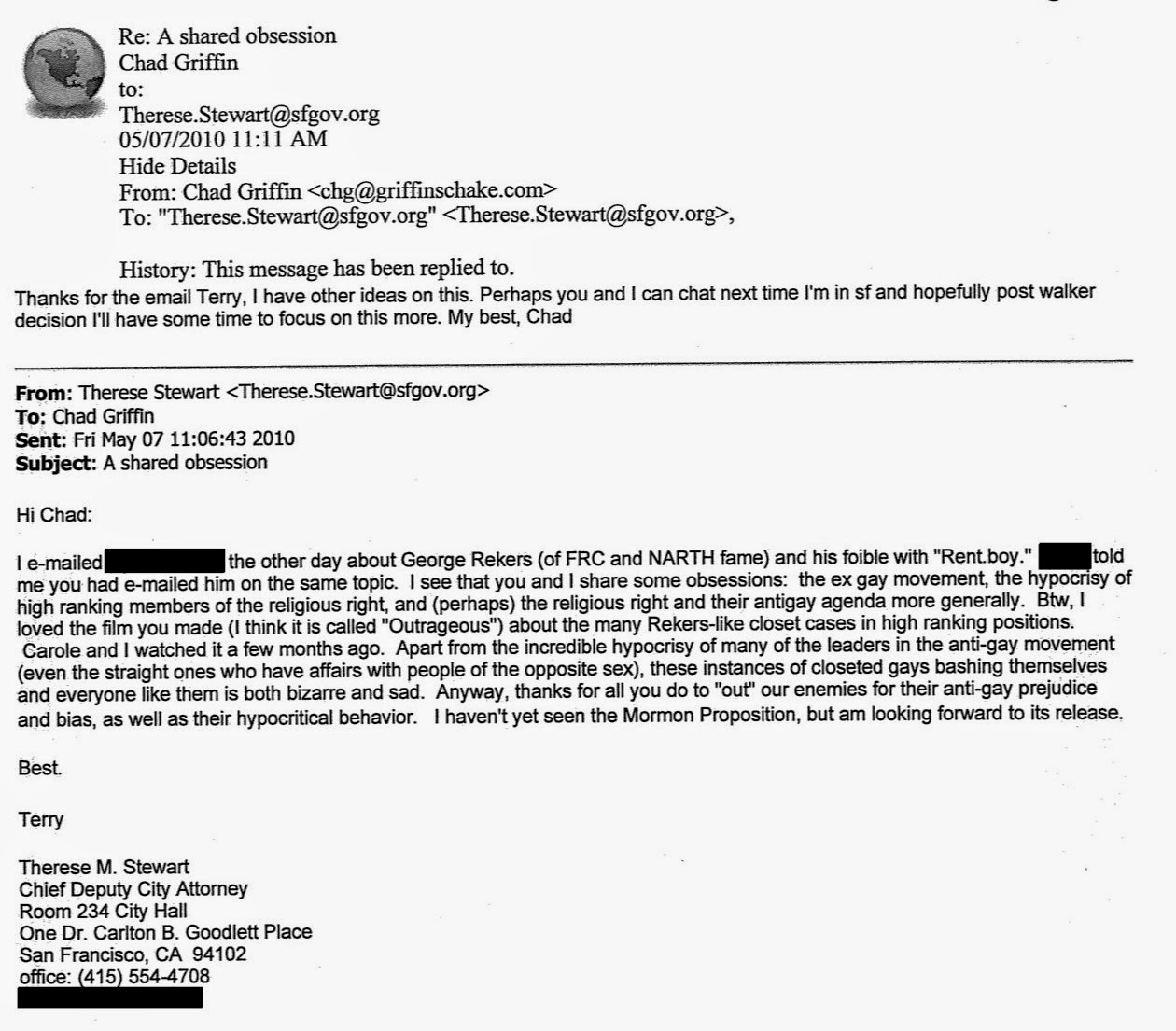 In May 2010, Stewart wrote to Griffin about the film he executive produced, "Outrageous", about the outing campaigns against closeted homosexuals with anti-gay agendas and the ex-gay movement's hypocrisy. 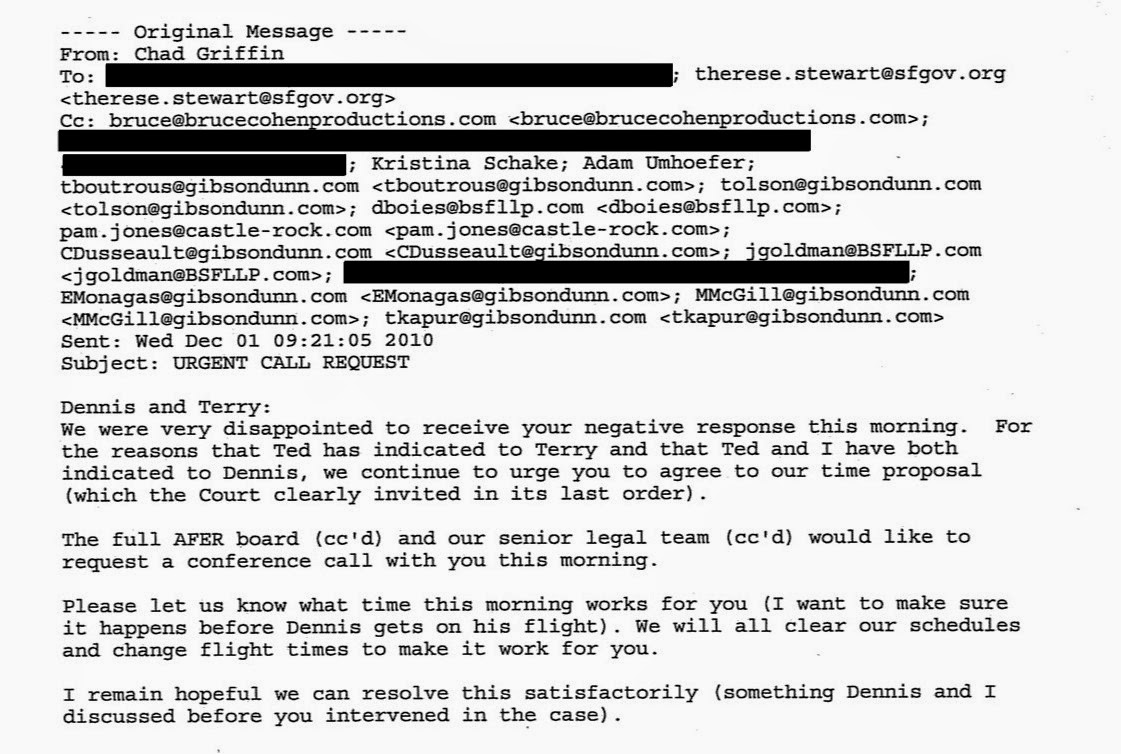 The most contentious exchange between Griffin and the City Attorney's office, in the emails released, took place in early December 2010 over a strategic time proposal, as outlined in this pushy email from Griffin trying to arrange a conference call.

Same day, a few moments later, Stewart replied she had no interest in the conference call Griffin wanted to happen. 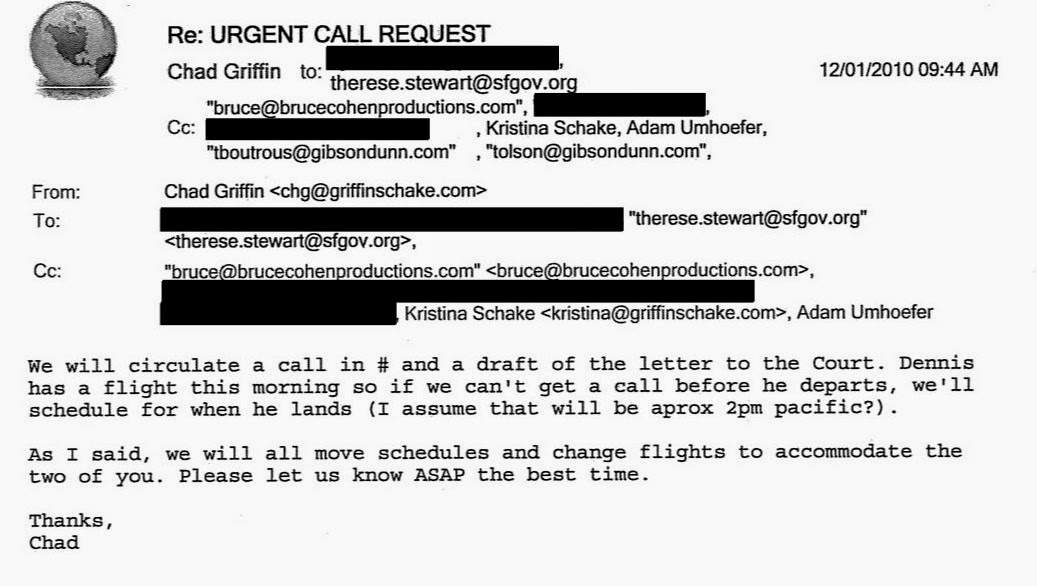 Undeterred, a minute later Griffin said he would circulate a number to dial into for the call along with a draft letter to be submitted to the court.

I suspect Griffin and Stewart got on the phone and tried to resolve their differences, to no avail, and he next emailed her to say they would accommodate Herrera's participation in the conference call and hoped she would join it.

The final email from Griffin of what was released was in early February 2011 and he says about some positive development, "Thank god we are smart negotiators!"

My hunch is that there were lots of other emails exchanged between these parties, but that the City Attorney and his staff used private addies for those discussions. One thing that keeps me amazed as more public records are released, is that there has not been a single email to or from Herrera himself. As I've said previously, he's learned well from Willie Brown to not write a damn thing down himself so there is no email trail to follow.