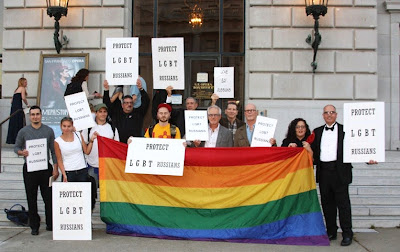 A dozen members of Gays Without Borders staged a successful vigil for LGBT citizens of Russia at Friday's opening night of the SF Opera's new season. Here we are with a few patrons on the steps of the War Memorial Opera House.


The video includes a snippet of us standing near the stairs of the War Memorial Opera House, our enormous rainbow flag blowing in the breeze, before U.S. House of Representatives Minority Leader Nancy Pelosi and her husband Paul appear. 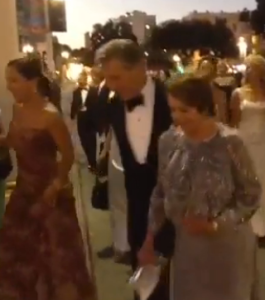 As we shouted, "Mrs. Pelosi! Support gay Russians!", she stopped for a moment to look at our signs and flag before grinning and giving the thumbs up gesture to us. 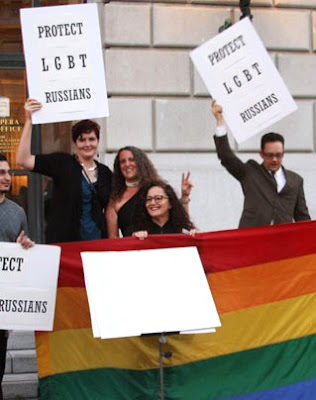 Melanie Nathan, member of the Marin Human Rights Commission, stands behind an enlargement of the solidarity letter signed by married lesbian soprano divas Patricia Racette, who sang in last night's performance of "Mephistopheles", and her wife Beth Clayton. Lots of opera-goers added their names to the letter. Read Melanie's report on last night at her blog.

Robbie Sweeny of BoycottRussianVodka.com, right, strikes a pose with actor Jason Lewis who had a prominent role on "Sex in the City" and fully supported our vigil and wished the best for LGBT Russians. 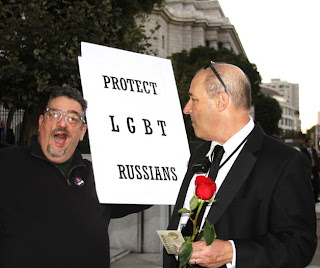 Eric Colby, house manager of the opera house, holds the rose Robbie Sweeny brought for Patricia Racette, looking at yours truly not letting Bell's palsy stop me from smiling for the camera. 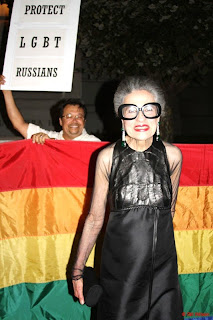 As Jorge Rodriguez of Gays Without Borders holds the flag and a sign, a grande dame shows her solidarity with our gay Russia cause with this photo-op. The fabulous lady is Joy Venturini Bianchi, a beloved socialite who runs her own house of couture and longtime friend of the gay community.

Many matrons and patrons staged their own photo-ops in front of our vigil for their Facebook pages and Instagram accounts.

All in all, a wonderful and fun evening engaging with high society on behalf of solidarity with Russia's lesbian, gay, bisexual and transgender community from the San Francisco cultural and political worlds.

A huge thank you from me to my activist colleagues and friends, all the fine folks at the SF Opera company and the opera-lovers for making September 6th's season opener a success!
Posted by Unknown at 12:02 PM
Email ThisBlogThis!Share to TwitterShare to FacebookShare to Pinterest

Wonderful pictures of what seems to have been a brilliantly handled event. Now let's see what happens at the Met. Even more reason for the statement there since I read in our British satirical mag Private Eye that a Russian filmmaker has just made a state-sancioned film about how Tchaikovsky loved women, declaring that the gayness was a wicked lie and the arts should not concern themselves with such filth.

The Met's attitude so far, is world's away from the supportive attitude in San Francisco. Basically, an armed camp, fear inducing, seige mentality, and at the same time one of stonewalling and completely ignoring. I urge anyone who's NOT signed out petition to do so at www.change.org/MetOpera

And please, please please... Ms. Racette and Ms. DiDonato... YOU sing at the Met. Won't you join in our efforts, as you did here.

This action was so fine. Can't thank the SF Opera folks enough for all their simple and important assistance. Was so great the patrons and matrons had a clue about the gay situation in Russia and supported us. So hoping there's a vigil or protest at the Met opening later this month.

More, perhaps, for Mr Rudin re the Onegin stickwaver, but in response to my 'When artists could speak out' piece on The Arts Desk, in which I said that purely to honour my own conscience, I wouldn't be attending any of Gergiev's gigs unless he said something, came this reply:

'I’m afraid Mr. Nice is unlikely to be found at one of Gergiev’s concerts anytime soon. Gergiev was asked about it by a Dutch newspaper. Today there was an article about his festival in Rotterdam. He said the law was misunderstood abroad: “In Russia we do everything we can to protect children from paedophiles. This law is not about homosexuality, it targets paedophilia. But I have too busy a schedule to explore this matter in detail.'

So he's abetting the pernicious equation in the law.