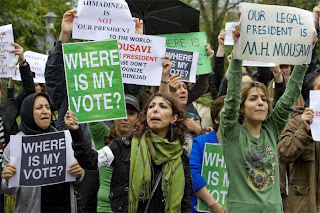 (Iranian women protest the Iranian election and results of 2009.)

At the September 15 annual general meeting of San Francisco Pride, which the Bay Area Reporter notes attracted nearly 150 attendees, one Paul D. Quick served as an election monitor. He has shared the vote totals in the comments of Patrick Connors' report on the meeting for SFist and I thank Quick for revealing this info.

Pleased to see most of my candidates won! Where is my vote? How many days till SF Pride declares the seven top vote-getters the new board members?

If you haven't signed the petition to SF Pride, demanding they ratify the vote and begin transitioning the new board members into service at the organization, please do so now and tell your friends to follow suit. Add your name here.

It's not rocket science:

These are the actual vote totals by name in rank order of results, followed by votes for, against, and abstaining. Asterisk indicates members of the challenging slate. Names in CAPITALS are the apparent winners, who were NOT allowed to take office.

These are the rules:

"E. A nominee shall be elected if s/he shall poll 'For' in respect of 50%+1
of all votes cast, minus abstentions. All ballots shall be opened and
counted by the Election Officers in public view.

"F. Any and all abstention votes should be subtracted from the total votes
cast for that candidate. An abstention is not a “no” vote and therefore
should not be counted as one. Candidates may have different 'total' vote
counts from which the 50% + 1 winning margin will be calculated.

Posted by Unknown at 12:14 AM
Email ThisBlogThis!Share to TwitterShare to FacebookShare to Pinterest

The rules for this voting process make no sense to me. (Maybe I'm misunderstanding something here?)

First, what does it mean to say "50%+1 of all votes cast, minus abstentions"? It would be difficult to find a less clear way to express whatever it is that is being expressed. Why not just give a formula, such as "A nominee is elected if, and only if: Y-A> 0.5*T, where Y is the nominee's yes votes, A is the nominee's abstention votes, and T is the total votes cast in the election." I'm not sure that's the right formula, since the rule was stated so poorly to begin with.

Second, why subtract the abstention votes from the "yes" votes? Aren't abstentions supposed to indicate indifference? Shouldn't it be the "no" votes that are subtracted?

This is the craziest-sounding set of voting rules I've ever seen.

It is a bit Alice Through the Looking Glass to think of Abstentions as negative and No Votes as neutral. We all suspected the Pride Committee was a rat's nest of consensus assembled through Kafkaesque rulings, and now there is finally the perfect example for all the public to see.