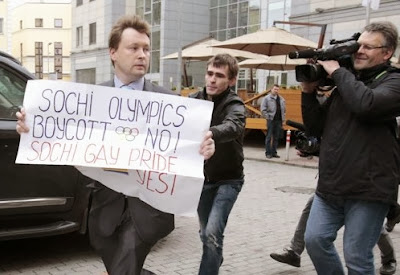 [CORRECTION: The sign reads "Sochi Olympics Boycott - No! Sochi Gay Pride - Yes!" This mistake of mine was pointed out by Andy Humm in the comments. I regret the error.]

After posting my concerns on Saturday regarding longtime global LGBT activist Peter Tatchell deploring the reckless hate and lies of gay Russian and anti-Semite Nikolai Alexeyev, Peter and I had a further exchange because I thought he needed to explain himself in more detail.

While I maintain tremendous respect for Peter and will certainly work with him in the future, on this matter of Alexeyev, I feel he doesn't fully understand the depth of anger and concern I and many others have regarding Alexeyev and those who have promoted or defended him. I disagree with Peter's assertion that Alexeyev is "politically dead" and a "corpse" and there is no to further "bash" him.

Today, Alexeyev staged a protest in Moscow over the Olympic Games in Sochi brandishing a sign promoting boycotting the Olympics, contradicting his weeks of dismissing Western activists' calls to do exactly that. He's not politically dead by any means and holding him to account is far from bashing. Here's my note to Peter:

There is more, I feel, that you need to explain regarding the very troubling hatred of Nikolai over the years and your closeness to and promotion of him.

1) Your distancing from Nikolai since 2011 was not known to me and others till recent days. Frankly, it's not enough to post a single tweet that really doesn't hold him to account for his latest outburst of hatred of Jews. Your 18-word tweet doesn't directly criticize him. You make a general statement against anti-Semitism when the problem is one man - Nikolai.

2) Your passing criticism of him in the gushing Pink News column of October 26, 2011, when he was again acting the diva and promising to leave the stage which he of course didn't deliver on, contained a total of 700 words. Except for a paragraph mildly rebuking Nikolai, the rest of it is total hero-worship. An 18 word tweet just doesn't compare to the hundreds of words of praise. I believe you must address the b.s. and controversies surrounding Nikolai in the past months in more than a handful of words.

It's not ok that you remained silent as he attacked fellow Russian gays, questioned their pleas for asylum in the United States, dismissed their fear their adopted children could be torn from their arms, heaped adoration on Putin, threatened to kill a gay Russian Jewish critic, falsely labeled myself and other Western critics pedophiles, and generally did all he could to keep his nuttiness a the center of attention.

3) Posting a short note at Doug Ireland's long over-due condemnation of Nikolai's b.s., was unknown to many until I blogged about it. I feel insulted that your mild spanking of Nikolai with one bland tweet and that short note just doesn't cut it.

My primary question is why do you think it's enough to issue the skimpiest of notes at this point, after years of Nikolai's idiotic venom and sliming of good people in Russia and outside, and you defending and promoting him? I am requesting that you more fully and explicitly, and at an online media platform sure to gain a wide readership, detail what you are condemning now about Nikolai's harmful words and behavior. You said on Euro Queer: "Sectarian attacks have no place in the LGBT and human rights movement. We should all concentrate on working together for the common good, whatever our differences."

Noble words, but when such attacks and a refusal to work together were the modus operandi of one Nikolai Alexeyev, you were not among those public and loudly telling him how wrong and destructive he was acting. For the good of global queer activism and solidarity that holds one and all to acceptable standards of behavior, speak out!

This is the reply I received from Peter:

With respect, I think you have misunderstood. You have over-estimated my closeness to Nikolai. I attended several Moscow Prides. That's all.

My distancing from Nikolai should have been obvious to all. I have not worked with him or endorsed anything he has done or said since 2011. Apart from attending Moscow Pride 2011, I ceased collaborating with him in 2010. I never attended successive Moscow Prides to support Nikolai but to support the Russian LGBT freedom cause.

At Moscow Prides 2006-2011 there were many Russians involved not just Nikolai. I worked with them all. I have also supported and publicised other Russian LGBT activists and organisations, such as Coming Out, Russian LGBT Network and Side By Side. I have never attacked other Russian campaigners.

Apart from the October 2011 tribute [in the Pink News], I don't recall repeatedly defending or promoting Nikolai. The tribute was written based on the report that he was bowing out of activism. I acted in good faith, based on what I knew about him at the time. The tribute took an overview of his contribution, seeking to put it all in perspective. It included a critical paragraph - quite critical in my view.

I do not belong to the school of politics that, on the basis of some wrong deeds, completely dismisses a person's many years of basically good work. I apply this principle to anyone and everyone: a balanced appraisal of their overall contribution. I have never endorsed any of Nikolai's bad behaviour. I criticised it at the time to him and to some Russian activists. I showed my disapproval by not involving myself in some of Nikolai's events and by not being closely associated with him.

You wrote: "It's not ok that you remained silent as he attacked fellow Russian gays, questioned their pleas for asylum in the United States, dismissed their fear their adopted children could be torn from their arms, heaped adoration on Putin, threatened to kill a gay Russian Jewish critic, falsely labeled myself and other Western critics pedophiles, and generally did all he could to keep his nuttiness a the center of attention."

I was not aware of any of these allegations that you make. You were obviously monitoring Nikolai. I was not. As I said, I was not that close to Nikolai. I was rarely in contact with him. I have never monitored his posts on facebook or twitter (until I was alerted by others to his anti-Semitic rants at the start of September - and not again since then).

However, I do know that Nikolai has shown enormous courage walking into mobs of 200+ neo-Nazis in an attempt to hold a Moscow Pride march. He has been under enormous pressure for many years, and lived with menacing threats, from the Russian state and church, homophobes and neo-Nazis.

He seems to have cracked in recent years. While not excusing his behaviour, my instinct is sorrow and pity. I don't feel inclined to now put in the boot. The man is down and finished. He has discredited himself. There is no need for additional denunciations. Moreover, I have no wish to further inflame the sad, sectarian bonfire of so much LGBT and human rights activism. The motivation of my human rights work is love for other human beings. I do not like in-fighting. I am more interested in fighting the real abusers of human rights. I hope you understand.

Nikolai is politically dead. Let him fade away. There is no need for anyone to further bash the corpse. It is no threat to anyone.
Posted by Unknown at 12:23 PM
Email ThisBlogThis!Share to TwitterShare to FacebookShare to Pinterest

I AM VERY HAPPY THAT MY FELLOW AND SISTER ACTIVISTS ARE FINALLY REALIZING WHAT AN ANTI-SEMITE NIKOLAI IS. I ALSO HATE IN FIGHTING. AND I HAVE TREMENDOUS ADMIRATION FOR PETER TACHELL. I ALSO AGREE WITH PETER. IF NIKOLAI IS FINISHED POLITICALLY, THEN I WILL NOT GO AFTER HIM. HOWEVER, IF HE IS NOT FINISHED, THEN I WILL CONTINUE TO GO AFTER HIM. MICHAEL, YOU WERE ONE OF THE ONLY PEOPLE UP IN THE BAY AREA TO HEED WHAT I WAS SAYING WHEN I CANCELLED NIKOLAI'S SPEAKING ENGAGEMENTS A FEW YEARS AGO. THANK YOU FOR BELIEVING ME. Robin Tyler

My friend Andy Humm in NYC brought this to my attention. I regret the error in misreading Alexeyev's sign. Andy says:

You seem to be misreading Nioklai's protest sign. Your write:

Today, Alexeyev staged a protest in Moscow over the Olympic Games in Sochi brandishing a sign promoting boycotting the Olympics, contradicting his weeks of dismissing Western activists' calls to do exactly that.

So he is not supporting a boycott.

Michael, I agree completely with your comments. I still have respect for Peter though I have not been involved with his group and his campaign for several years. I think though that there is a serious issue here and Peter is sometimes far too soft with LGBT "community leaders" who express racist and anti-immmigrant sentiments. As you know I have raised this issue with him before. He would not take the same attitude if a Black or Asian person espoused homophobia. Now the cat is well and truly out of the bag we should continue to monitor Alekseev and in particular any groups that choose to give him a platform in the name of supposed "free speech." Nobody should endorse him and his disgusting views or help him spread his poison and if they do then protests should be mounted by anti- racist campaigners at any such event. Too many LGBT "community leaders" are indifferent to racism and other forms of bigotry and think homophobia is all we should bother our heads about (I know Peter himself does not take that attitude though). I have not forgotten and I am sure you haven't that another of Peter's allies abused you because of your HIV status.