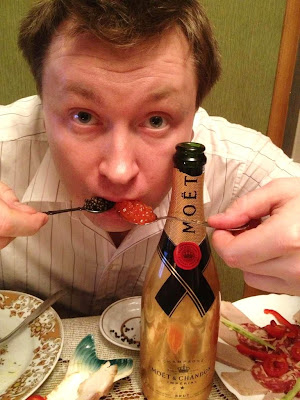 Better late than never. Longtime gay progressive pundit Doug Ireland in the current edition of Gay City News condemns the horrific and blatant hatred of Jews expressed by disgraced gay Russian activist Nikolai Alexeyev, pictured. For too long, Ireland provided a platform for Alexeyev with nary a word said about his many troubling remarks about other LGBT Russians, Western supporters and declarations of hate toward his critics and Jewish people.

I'm happy to report Ireland, in an editorial signed on behalf of the entire staff of Gay City News, explains his changed views:

And as part of our coverage, we reported in dozens of articles over the years on the liberation struggles of Russian queers and on Alexeyev’s key role in organizing those combating for the love that dared to speak its name [...]

Because we so admired the courage and effectiveness of the hardy band of lesbian, gay, bisexual and transgender activists led by Alexeyev in raising the visibility of homosexuality in Russia and in asserting their right to love, we were all the more shocked by Alexeyev’s diatribes in recent weeks [...]

On Facebook and Twitter, Alexeyev poured forth a stream of invective against “the Jewish mafia trying to overtake the world and now LGBT fight in Russia,” claimed that “America is ruled by Jewish mafia,” and proclaimed himself the successor to the late neo-fascist politicians Jörg Haider of Austria and Pim Fortuyn of the Netherlands, two queers whose racism and anti-Semitism motored their electoral successes [...]

To be even more precise: Nikolai Alexeyev has now consigned himself to the trash bin of history along with all the other legions of racist zealots. We can only hope that our queer Russian brothers and sisters, who are under the most dire attack, will not be further undermined or tarnished by the unspeakable calumnies he is now broadcasting in their name or demoralized by Alexeyev’s defection to the camp of bigotry.

I heartily welcome Ireland and the staff of Gay City News publicly condemning the rotten thinking and deplorable behavior of Alexeyev. Let's hope other supporters of Alexeyev's wise up, condemn his hatred of Jews and embrace of Vladimir Putin.

On the Euro-Queer listserv, Alexeyev had this to say in response to Ireland and Gay City News:

Loved reading this tabloid trash which is just another proof that Americans understand very little on what is going on in the Russian LGBT community in particular and in the long Russian history in general. That is why they will never improve the situation of LGBTs in Russia, even with millions of USD. We are here and we will continue our fight.

But don't see the point to use my precious time to reply to this "yellow" crap. I have so many court cases, so many campaigns and so much work, with 30 cases pending at the European Court (which I will win), that to spend time to dispute on notions is not something we can afford now. We have to work, let others write their crap.

No, what appears this week in Gay City News is not yellow journalism nor is it crap. For a prime example of both, check out Alexeyev's essay in August for the Kremlin's TV and online propaganda outlet Russia Today.
Posted by Unknown at 1:00 PM
Email ThisBlogThis!Share to TwitterShare to FacebookShare to Pinterest