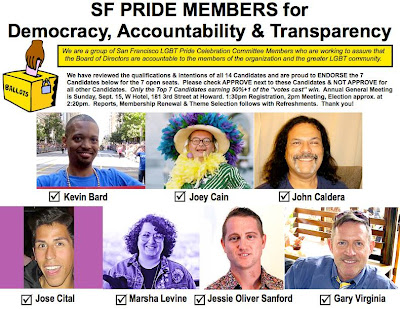 (Six members of the reform slate, except for Kevin Bard, received the most votes. They are Joey Cain, John Caldera, Jose Cital, Marsha Levine, Jesse Oliver Sanford and Gary Virginia.)

Please sign the petition urging ratification of the membership's vote.

The San Francisco Pride blog was last updated July 2 and the full Pride site is completely devoid of any info about their recent membership meeting, forgot about their meeting tomorrow. On the other hand, much to their credit, the SF Pride Members for Democracy, Accountability and Transparency has a Facebook page open-to-all with details about Sunday's meeting and what is happening on Wednesday.

Failure to utilize that great new invention called social media is a huge reason why the current board members must finally and comprehensively move on and permit the winners of the election to begin the transition process. For me, that process starts at this event.

The alternative and mainstream press, bloggers and Facebookers, queers with recording devices, ordinary lesbian, gay, bisexual and transgender folks, one and all, please be at this homo historic event. From Davace Chin, vice president of the board, to board candidates:

I wanted to provide you the latest update on the election process of the recent SF Pride Board of Directors election. I have confirmed that the Election Officers and Observers are available and will reconvene tomorrow:

At this time, the Officers will recalculate the votes, certify the results and announce the 2013-2014 Board of Directors. I anticipate this process should take no longer than 20 minutes. As with our recent AGM, this process is open to the public. Thank you all for your patience.

This was sent to all members and explains a bit of what Pride has been up to, as we've all waiting for the election results to be ratified:

The San Francisco Pride Board of Directors met and conferred with its Interim General Counsel to review the legal implications of the events of the Annual General Meeting (“AGM”) and requested advice and counsel on possible next step, specifically with respect to the election of the Board of Directors.

While respecting the privilege of that attorney-client communication, we can disclose that as a result of a mathematical error in the formula used in the calculation of votes, the Election Officers will be reconvening on September 18, 2013, 7:00 p.m. at the San Francisco LGBT Center to complete the final calculation process, officially certify the election and issue an announcement of the 2013-2014 Board of Directors.

Posted by Unknown at 10:26 PM
Email ThisBlogThis!Share to TwitterShare to FacebookShare to Pinterest