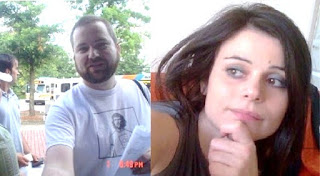 (MacMaster, left, and Jelena Lecic, who is not the lesbian Syrian at the center of an international controversy. Credit: Julius Just, via the Post.)
Over at the Blog Post of the Washington Post, Elizabeth Flock today writes about the year's most memorable faces and among them is Tom MacMaster, the hoaxer behind the phony Gay Girl in Damascus blog. Flock provides an excellent update on where he is now using the file I pried loose using FOIA laws across the pond, and also informs us about the BBC including the young woman whose photo was used by MacMaster to carry out his sham. From the Washington Post:

Using documents released by the University of Edinburgh under the U.K.’s Freedom of Information Act, San Francisco activist and blogger Michael Petrelis found that MacMaster was allowed to stay on as a student at the university under two conditions. One, he promised not to create any more fictitious personas online, and two, he vowed not to discuss the Gay Girl in Damascus hoax with the media or public.

MacMaster’s words, from the documents:

The documents include a letter sent to MacMaster from the University of Edinburgh’s Vice Principal for Equality and Diversity Professor Lorraine Waterhouse and Chief Information Officer Jeff Haywood. In the letter, they ask that MacMaster not engage in any more hoaxes. MacMaster replies:


I will not engage in any further actions of this kind whilst a student of the university.


Petrelis writes: “If there was a genuine effort to deliver authentic accountability over MacMaster’s links to the university and the hoax, it’s missing from the file released.”

As for Jelena Lecic, the unsuspecting London-based Croatian woman whose photo MacMaster used to pretend to be Amina Arraf, she has been staying out of the limelight ever since the hoax. On Wednesday, however, BBC chose her as one of the women in their list “Faces of the Year: 2011.”
Posted by Unknown at 2:38 PM
Email ThisBlogThis!Share to TwitterShare to FacebookShare to Pinterest