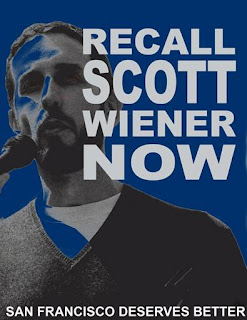 Nice of our local daily tabloid to write up a news note about this political development. From today's San Francisco Examiner:

Supervisor Scott Wiener, who represents the Castro district, among other neighborhoods, is the target of a Facebook campaign to recall him from office. The Petrelis Files blog reported that Castro resident and attorney Stephen Zollman created the page, which had more than 50 supporters as of Wednesday night. Wiener was elected to the board in 2010.

It's my hope that at this Saturday's Occupy the Castro General Assembly, that there are folks who address the many reasons why Wiener is such a bad Supervisor and should face a recall vote. The assembly begins at noon at Harvey Milk Plaza. Come speak out and voice your concerns about all issues related to the Castro and the larger LGBT community.