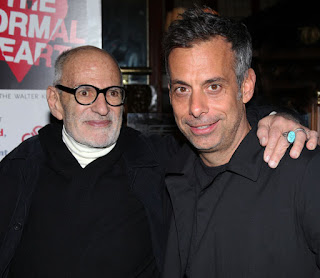 (Larry on the left, with Joe Mantello who played Ned Weeks in the Broadway revival of "The Normal Heart". Credit: Walter MacBride, Retna.)
My old friend and political inspiration Larry Kramer received a fabulous accolade from the Gray Lady on Sunday. One of the New York Times' theater correspondents, Patrick Healy, on Christmas Day had a look back at 2011's notable theatrical productions and people and Larry was singled out for his persistence:

MOST RESILIENT GADFLY Larry Kramer, the 76-year-old gay activist, who marked his long-awaited Broadway debut — the critically acclaimed production of “The Normal Heart” — by handing out letters to theatergoers after performances, imploring them to keep pushing for government action on H.I.V. and AIDS.

Congratulations, Larry! No need to say "keep it up" since we all know there is no chance of Larry going silent or inactive. And exactly what did he have to say in his message as folks left the theater? Here's the full text of the note:

Please know that everything in The Normal Heart happened. These were and are real people who lived and spoke and died, and are presented here as best I could. Several more have died since, including Bruce, whose name was Paul Popham, and Tommy, whose name was Rodger McFarlane and who become my best friend, and Emma, whose name was Dr. Linda Laubenstein. She died after a return bout of polio and another trip to an iron lung. Rodger, after building three gay/AIDS agencies from the ground up, committed suicide in despair. On his deathbed at Memorial, Paul called me (we'd not spoken since our last fight in this play) and told me to never stop fighting.

Four members of the original cast died as well, including my dear sweet friend Brad Davis, the original Ned, whom I knew from practically the moment he got off the bus from Florida, a shy kid so very intent on become a fine actor, which he did.

Please know that AIDS is a worldwide plague.

Please know that no country in the world, including this one, especially this one, has ever called it a plague or acknowledged it as a plague, or dealt with it as a plague.

Please know that there is no cure.

Please know that after all this time the amount of money being spent to find a cure is still miniscule, still almost invisible, still impossible to locate in any national health budget, and still totally uncoordinated.

Please know that here in America, case numbers continue to rise in every category. In much of the rest of the world - Russia, India, Southeast Asia, Africa - the numbers of the infected and the dying are so grotesquely high that they are rarely acknowledged.

Please know that all efforts at prevention and education continue their unending record of abject failure.

Please know that beginning with Ronald Reagan (who would not say the word 'AIDS' publicly for seven years), every single president has said nothing and done nothing, or in the case of the current president, says the right things and then doesn't do them.

Please know that most medications for HIV/AIDS are inhumanly expensive and that government funding for the poor to obtain them is dwindling and often unavailable.

Please know that the pharmaceutical companies are among the most evil and greedy nightmares ever loosed on humankind. What 'research' they embark upon is calculated only toward finding newer drugs to keep us, just barely, from dying, but not to make us better or, god forbid, cured.

Please know that an awful lot of people have needlessly died and will continue to needlessly die because of any and all of the above.

Please know that the world has suffered at the very least some 75 million infections and 35 million deaths. When the action of the play that you have just seen begins, there were 41.

I have never seen such wrongs as this plague, in all its guises, represents, and continues to say about us all.

Posted by Unknown at 12:01 PM
Email ThisBlogThis!Share to TwitterShare to FacebookShare to Pinterest