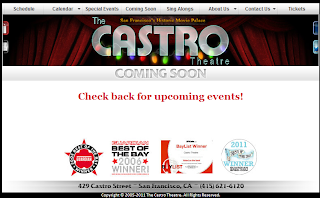 [UPDATE No. 3: My Deep Throat source is revealed here.]

Ladies and gentlemen, it is with deep sadness that I inform you of an era coming to an end in San Francisco. The venerable Castro theatre at the end of this year will no longer regularly show films and many staffers were fired this week.

After catching the press screening this afternoon of "A Separation", an excellent Iranian drama that is the Islamic Republic's official entry for the foreign language Academy Award, a local film industry source spilled the bad news about the Castro theatre. For professional reasons, the source has requested confidentiality.

Here are details of the bad news for our cherished single-screen movie palace, owned and managed by Don Nasser.

Come January regular movie programming will be a thing of the past. No more almost-daily films shown. Word is that the enormous screen will shrink for an occasional film festival, but nothing is firm about the screen or a solid commitment to festivals.

The Castro will transform itself into a live performance venue, that is supposed to bring in more profits for the owner than movie showings. To better accommodate the needs of musicians, singers, comedians and the like, the small backstage area along with the stage and screen will undergo significant redesigning.

Most of the theatre's management and consulting teams have been let go, and not one gay person remains in a senior position.

Listening, slack-jawed I might add, to the source deliver the depressing news it crossed my mind to ask if there was hope Supervisor Scott Wiener might help restore and save the movie-going component to the Castro.

My source scoffed at the notion Wiener would sweat over the loss of the theatre as we now know it. We didn't go near the third-rail subject of the psychological blow to the area. There will be time for that in the future.

Seems to me turning the Castro from a low-priced film temple into a higher-priced live performance venue would equal fewer folks coming to the gayborhood. Reducing reasons for visiting the area will diminish its already-battered vibrancy and displease the struggling merchants.

I am so sorry my gut fear has proved true. Back in April when I blogged about the Castro being shuttered eight-nights that month, hope was that it was an aberration, but in August the sad sequel, another eight-nights of darkness were on the calender. The fear was that so many closed nights could lead to no more regular almost-daily movies.

I didn't have the heart to write about the December Castro calendar, with the third month of eight-nights of no movies, when it was announced because I recalled other months this year when the theatre was shut just four or five nights.

The coming soon page for the Castro usually has a couple of items listed for the following month's highlights, but not today as witnessed in the screen grab above.

If Don Nasser has different information than what I was told today, I'd be happy to hear it and write that what I heard was wrong.

[UPDATE #1: Folks have written to me to say what I was told was incorrect information, and I have emailed and left voice mail for my source, asking the source for clarification. Hope to have a response from the source this morning and will update/amend this post.]

[UPDATE #2: I've conferred with my source and they stand by the changes reported last night that will eventually take place over the next year or so at the Castro. The source maintains the owner is headed in a live performance direction and stands by the information shared with me. The source's identity will be made public at the appropriate time. I have also reached out to Walt Von Haufe, the publicist for the theatre and hope to hear back from him soon.]
Posted by Unknown at 7:22 PM
Email ThisBlogThis!Share to TwitterShare to FacebookShare to Pinterest

Suppose the Theater were to post its Income Statement and Balance Sheet, and then solicit from donors contributions so that it might remain in business another year. (Hopefully, if successful, then another....) For each dollar of revenue received by the Theater, or perhaps for each dollar of salary paid out, the donor would contribute .05 cents, up to a maximum of $250. Contributed to Save the Castro Theater, a qualified nonprofit, which after paying for its necessary expenses of organizing, would contribute all its revenues to the Theater. Donors would hopefully line up, and names be published in a local newspaper. The fund of matching contributions could grow on a "thermometer thingee" like traditionally used, rising over time.

This is a local tragedy. I just moved back to San Francisco after a year away, and the Castro Theatre was by far one of the most exciting local institutions to return to. I'm crushed.

i've worked at the theater part time for 12 years- and if this is true- and THIS is how i'm finding out about it, you'll have to excuse me while i go pass out.

ignore my last post- from the long time employee of the theater. took one quick call to find out this is totally bogus. you took the word of one bitter demoted employee without fact checking. PLEASE correct this. the theater has been inundated with calls- and i can happily report we will be stronger than ever in 2012!

I am heartbroken to hear this news, it's like losing a best friend...
I have always said (even when I lived in LA) that "the best place to live is walking distance to the Castro Theatre" ~ I am up for any scenario to help save the Castro & I know the community & others all over the Bay Area will too. ~ It's worth fighting for!

Apparently, not true. Sources who would know tell me that it's just a rumor started by a disgruntled employee.

Thanks for the update. Inspired by the piece, I went ahead and created a petition (crediting this article for the 411) on Change. org asking the theater to reconsider. Here's the link:

Thanks for all your work! :)

Sorry guys, but I think it is a great idea! More great live entertainment on the stage of the Castro is a real plus. I have seen many live performances there and they were fabulous. I hope the idea flies!

I'm just throwing this out as an observation, but Atlanta's equivalent venue "The Fox Theater" is showing movies to supplement the revenue of live shows. Forcing the venue to decide between the two is a little short-sighted. I'm going to be heartbroken if I've missed the final "Night of 1,000 Showgirls".

"Just to set the record straight, the Castro Theatre will continue to show Rep films, Film Festivals and occasional live performances. Any rumors out there are totally false."

So, who was fired? Is the staff still working there or not? No matter what the theater's plans are those staff members either have jobs or they don't.

Hey, This is not true:

That is the official castro facebook page. They comment about this rumor. Plus this article sounded like all conjecture and here say, I was not convinced, I work on the organ there and have heard nothing of the sort.

@ Anyonymous- They never said they were closing down the theater, they are just re-organizing their venue. It states in the article that there is a larger monetary gain for the owner by switching- In which case isn't that anyone's goal for their business. While changing what has been an Iconic and Memorable theater for years I am thinking that sometimes change can be a good thing. It will definitely be different from what we are all used to, but hey, give it a shot, they can always go back to the way it was.-

Sad, but inevitable. I'd rather see the Castro live on as an entertainment venue than be turned into condos.

Bitch and whine all you want, but showing old movies isn't a good business anymore. The owner is just doing what he needs to stay in business.

You're all going to line up to pay $1,000 or so for season passes to subsidize the theatre, right? or were you expecting somebody else to step up and do that for you since you'd rather spend your disability check on booze?

This is Bob Hoffman with the Castro Theatre. Everything you posted in your blog is misinformation. We have hired a new booker/General Manager and unfortunately it seems that someone who is unhappy with these changes is spreading misinformation. We would appreciate it if you could set the record straight on your blog. This is the official statement from the Theatre management (it also appears on the Castro Theatre FB page):

The Castro Theatre is pleased to welcome Keith Arnold as film booker and general manager of all theatre operations. We look forward to continuing our tradition of fine cinema presentation, hosting great festivals and unique, diverse programming. Please join us in celebrating this news. We will be excited to share more info soon.

If they start doing live events for the two nights the theater is dark then it's a win-win for everyone isn't it? The castro is wonderful as a film venue, it is also a landmark and doing live events there is AMAZING. The more film and live events they can do the better for the business and for the communittee, more events with more people mean more foot traffic and more support for the castro and the neighborhood. so what's the bad thing again?

"I've conferred with my source and they stand by the changes reported last night that will eventually take place over the next year or so at the Castro. The source maintains the owner is headed in a live performance direction and stands by the information shared with me. The source's identity will be made public at the appropriate time."

--Everyone knows who this source is.

--Are you really willing to risk your credibility standing by an embittered (and oft-demoted) former employee, on the remote chance that you'll be able to say "I told you so" to your fellow film lovers in a year or so? Especially now that the Castro has made the very public move of bringing on a highly respected (and DAMN creative) programmer?