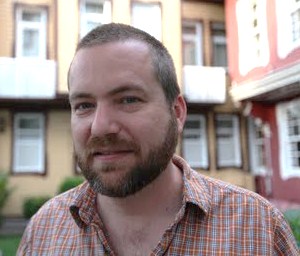 The Records Manager for Edinburgh University on December 23 emailed me a two-page letter and fifty-three-page file in response to my Freedom of Information request, seeking the results of their two investigations into the Gay Girl in Damascus hoax perpetrated by their student Tom MacMaster (pictured), and what is clear from the records is that the institution was never committed to releasing the results.

Emails between university officials shows an overriding effort to avoid creating an email or paper trail, with the preferred method of any communication about the matter being personal chats, and a full understanding of FOI requirements regarding destruction of records to better cover the institution's ass.

If there was a genuine effort to deliver authentic accountability over MacMaster's links to the university and the hoax, it's missing from the file released.

When the press office announced two investigations into whether MacMaster, a visiting student from the United States, had violated computer rules or ethical guidelines the officials knew full well they would never reveal the results of the probes.

Privacy sections of United Kingdom FOI laws allow schools to withhold confidential information pertaining to students and their conduct, and the university conveniently omitted this important fact when they issued a statement regarding the probes. Student privacy is why the results of the investigation have not been made public.

It's also why the letter from MacMaster, who is still a student at Edinburgh University, to one of the investigators responding to their charges is 99 percent redacted. That letter is page 30 of the 55-page file, all of which is available here:

After receiving the university's file, I contacted Benjamin Doherty of the Electronic Intifada site and shared the file with him. Back in June when MacMaster's hoax was unraveling, it was all due to the diligent research of Doherty and his colleague Ali Abunimah, and their evidence was presented here.

MacMaster’s blog, “Gay Girl in Damascus,” featured a character named Amina Arraf who was a US citizen, lesbian, literate and leftist. Tom had written Amina Arraf before, but this time his work would achieve international notoriety and similarly earn him international scorn.

The “Gay Girl in Damascus” was written to appeal directly to liberal, English-speaking readers. Moreover, Syria has been in a state of near media blackout especially since the breakout of revolts there in March.

In June before going on vacation to Turkey with his wife Britta Froelicher, MacMaster introduced a plot twist: Amina Arraf was mysteriously seized from the streets of Damascus. This led to genuine and global concern that a real person had been seized and faced imminent harm at a time when activists and bloggers were facing repression by Syrian authorities.

Doherty goes on to note the small acts of accountability carried out by the university investigators:

The first evidence of discipline is the University’s official statement on 13 June 2011, the day after the hoax was exposed:

The University will investigate whether the student has breached University computing regulations. The Principal has directed Vice Principal Knowledge Management and Chief Information Officer [CIO] Jeff Haywood to suspend the student’s computing privileges pending the outcome of the investigation.

You must give, in writing, an unequivocal assurance that you will not engage in any further actions of this kind whilst a student of this university.

I will not engage in any further actions of this kind whilst a student of the university.

And that is the extent of the public accountability from Edinburgh University over this sordid affair. In my view, the university was shamefully lax in holding MacMaster to account and was all too willing to keep the public in the dark about the results of the investigation, which are omitted from the 55-page file.

Thanks to the UK's FOI laws, both MacMaster and Edinburgh University have been subjected to a small degree of additional accountability.
Posted by Unknown at 10:31 AM
Email ThisBlogThis!Share to TwitterShare to FacebookShare to Pinterest