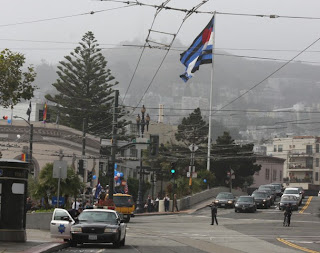 (Leather folks receive special rights from MUMC every year when they are allowed to raise their flag on city property, while the rest of us are denied equal access to the flagpole. The black-and-blue kink flag flying during September 2010 Leather Week. Credit: Bill Wilson.)
Last week, I was surprised to see the Bay Area Reporter's editorial about Supervisor Scott Wiener, who received their endorsement in 2010, delved into the rainbow flag controversy that's been alternately raging and simmer over the eleven-months since I launched a campaign to bring public control to the public flagpole on city property.

While the SF Chronicle, on the front-page no less, SF Weekly, Bay City News (whose story via the KPIX-TV site was linked to by the Drudge Report), the Castro Courier, SFist, the SF Appeal and a good number of personal blogs, all ran stories about the iron-handed control of the flagpole, the BAR has not covered the controversy in its print edition, and their February 3 blog post about efforts to lower the flag for murdered gay Ugandan David Kato should have been the topic of a followup piece.

The BAR blog in February said:

[Steve] Adams pledged to have MUMC’s board address the community complaints about the flag policy. “I am open to dialogue. There may be a compromise between the activists and MUMC,” said Adams. ...

“The bottom line is a lot of it is tourists. They want to see that flag up,” said Adams, who plans to bring up the matter with his board. “It is not my decision; it is a board decision.” He said based on the phone calls he has had this week with board members, the majority support keeping the status quo.

“I am open to dialogue though,” said Adams. “They may not get what they want, but I am open to talk about it. That is a democracy.”

What richness. A banker who acts like a banana republic despot lecturing everyone about democracy. Lemme know when democratic engagement takes root in the Castro.

Twice it's stated MUMC would have open dialogue with activists and the larger community, and as the BAR staff wells know, every effort made at the Castro Benefit District, Department of Public Works, MUMC and through the City Administrator's office have been killed either by Adams or Patrick Batt of MUMC, Wiener, or a combination of those three.

The BAR could do the community a huge favor and simply write about the current status of the controversy, and how we got to the point where one bully at a bank is the sole controlling agent for an important piece of LGBT property that belongs to the city? Report on the killed meetings, why they never happened and get the victims of Adams and Wiener's bullying to go on the record about the crap Adams and Wiener have done over the months?

Very odd of the editor to lament Wiener's silence on the flagpole, when her own paper has been silent too and they could have broken that silence simply by putting a reporter on the story. It's not too late to do that, in the name of ethical, community journalism. From the BAR last week:

One issue people do seem to want addressed is control of the flagpole in Harvey Milk Plaza, and on that topic Wiener has been mostly silent.

While the flagpole itself is on city property, the city had passed off management of it to the Castro merchants' group.

This year alone, several people have requested that the flag be lowered to half-staff in memory of a murdered gay activist (David Kato), an icon's death (Elizabeth Taylor), or due to national import (the 10-year anniversary of 9/11), with mixed results.

There ought to be some sort of process – rules! – so that the public can make a request and it can be quickly vetted. No one's going to understand why the flag was lowered weeks after someone's passing.

Or, if it's decided that the flag will never be lowered, as is the case now, then the Merchants of Upper Market and Castro should stop complaining and be prepared to deal with the requests and criticism that will inevitably come.
Posted by Unknown at 4:51 PM
Email ThisBlogThis!Share to TwitterShare to FacebookShare to Pinterest