A few weeks back, my old queer radical pal Tommi Avicolli Mecca were chatting on the phone about the December 3 Occupy the Castro, which was to address how the majority of LBGT are a constituency within the 99% of average Americans getting sold out while the banks get bailed out.

We tossed around several ideas for targets on our economic injustice tour of the Castro. Start at Sterling Bank on Market and Church where Steve Adams, the vice president for the branch and bully of Merchants of Upper Market/Castro who illegitimately controls the key to the flagpole at the public Harvey Milk Plaza, works and send him another message to end his dictatorial tactics on the flagpole and larger Castro economic issues.

The all-but-invisible headquarters of Equality California on Market but closer to Castro Street was also considered, but we rejected stopping at Sterling Bank and EQCA this time because we anticipated a robust crowd for Occupy The Castro, and better to assemble at Harvey Milk Plaza at noon.

Over the course of ninety-minutes we chanted, spoke out, marched in the streets without a permit, distributed flyers, went into CitiBank's branch on Castro with a bawling baby and dozens of us surrounding a banker as a letter was read to him demanding that his and all banks start paying for public health and education while ceasing evictions and foreclosures.

We waved at our friends and neighbors and tourists who cheered us on, or gave raised,clenched fist salutes, as about ten uniformed police officers from the Mission station generally kept their hands off us, except when they blocked activists from entering the Bank of American branch near 18th Street and Herth Realty on Castro.

Because the Human Rights Campaign is still the Worst. Gay. Rights. Group. Ever., riddled with Democratic gay 1 percenters, has sold out transgendered folks over employment and other protections and sucked up hundreds of millions of gay dollars keeping their merchandising operation in business with so few tangible changes for ordinary working LGBT people, they received a visit from us.

This note was read to the sales clerks and a hard copy was left to be distributed to all HRC executives, employees and members:


Whereas 40% of SF’s homeless youth identify as queer, and 20-40% of homeless youth nationally (according to an NGLTF and National Coalition on Homelessness study) say that they’re LGBT;

Whereas a Williams Institute study shows that the queer community is as poor as, and in some instances poorer than, any other community;

Whereas 75% of transgender people in the Bay Area are unemployed or only employed part-time;

Whereas people with AIDS are constantly facing cuts in their benefits, forcing them to live on less and less;

Whereas affordable senior housing is a crucial need within our community all over the country and the units that have built are too few to meet the need;

Whereas queer neighborhoods throughout the country have been hit with speculation and gentrification, displacing lower-income LGBT folks;

Therefore we call on the Human Rights Campaign to make affordable housing, living wage jobs, the maintenance of benefits, and healthcare for all priorities that it pushes on both the local and national level. Never has it been more critical for our national organizations to stand up for bread-and-butter issues that affect the 99% of us who struggle to make ends meet every day. 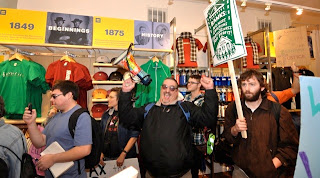 (Occupy HRC, December 3, Castro Street clothing outlet. That's me with the bull horn. Credit: Rick Gerharter.)
Many thanks to everyone who participated in any part of our fantastic queer tour of the Castro on Saturday. Greatly empowering to be among allies inside HRC's space telling the organization, "HRC, don't speak for me!" and "We're a movement, not a market!" I can't wait till we return to the Castro neighborhood and HRC's store for additional actions over the holidays and in the new year.
Posted by Unknown at 3:29 PM
Email ThisBlogThis!Share to TwitterShare to FacebookShare to Pinterest