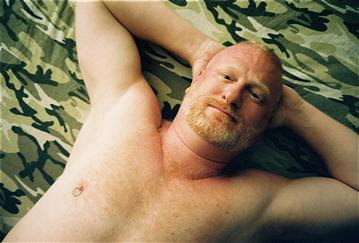 (Rusty McMann, from his site.)
A gay male sex worker who operates under the pseudonym Rusty McMann, from Las Vegas, penned a somewhat daring defense of using Craigslist to make his living provide adult body-contact services.

It ran on the op-ed page in yesterday's San Francisco Chronicle, and made many predictable points about consenting trade among mature individuals. But it went one dangerous step further in calling for outright vigilante barbarism against a select group of criminals:

Am I sick to death of heterosexual white male "Christians" making political hay off the backs of consenting adults who have made difficult choices with their eyes wide open, while leaving people these politicians have professed to help twisting in the wind? Damn skippy!

And I want to be clear: I hold those responsible for the sexual exploitation of children in the deepest contempt. If it were up to me, the pimps and johns who perpetrate these crimes would be fed alive to wild boars.

This is exactly why this whole circus is so repulsive: It legitimizes the supposed moral superiority of these politicians to not-very-discerning voters while doing nothing to help catch the real bad guys.

Talk about making political hay off the backs of criminals, who, no matter how reprehensible their crimes, McMann uses to establish some moral superiority for his sexual and monetary activities. I'm also sick to death of any gay endorsing the death penalty.

In Iran he'd be considered a sexual deviant who if convicted of his crimes against the law and local religious rules, would be executed perhaps by the barbaric method of hanging. Afghanistan's Taliban murdered homosexuals by collapsing brick walls on them. One country's sex deviant worthy of killing is another country's happy homosexual hooker.

Rather than back vigilantism, this Las Vegas hooker should renounce his call for a rejection of the rule of law, appropriate penalties and sentencing, and civil liberties for anyone. How about we leave all crimes in the hands of the courts and criminal justice system, and not return to caveman-style justice.

One final point. Again, not that I endorse his call for the violent deaths of one class of criminals, but if he's going to advocate for child sexual abusers to be executed by animals, why limit himself to just johns and pimps? He seems to have forgotten all the priests, bishops and other Catholic leaders who've engaged in the same criminal behavior.

Who wants to wager that the SF Chronicle would not have allowed McMann propose the death-by-boars style of justice by applied to priests who've assaulted and violated kids? If they had, maybe this opinion piece would have attracted some attention.
Posted by Unknown at 4:23 PM
Email ThisBlogThis!Share to TwitterShare to FacebookShare to Pinterest