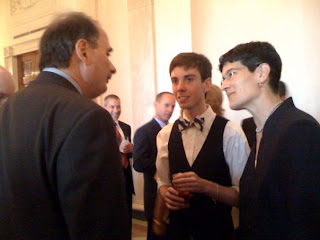 (Eliza Byard, GLSEN's current ED, listening to Obama adviser David Axelrod, on June 29, 2009. Will she jeopardize White House access and demand administration action? Credit: GLSEN.)
Before he joined the Obama administration as the Safe Schools Czar and took a vow of silence, Kevin Jennings was the executive director of the Gay, Lesbian and Straight Education Network, an advocacy org for safe learning environments for students. I checked GLSEN's site today, hoping to find a statement over the recent bully-driven suicides of two young male students, Adam Walsh and Asher Brown. My post on their deaths and Jennings' silence is here.

We have not issued a statement. We are very concerned, obviously. But out of fear of suicide contagion, we have chosen to be cautious in our public response. I assure you we are working behind the scenes to address these specific incidences, but we are trying to tread carefully. We will have much to say in the coming weeks, including a new nationwide effort to make schools safer for LGBT youth. We want to make sure we do and say the right thing. [Emphasis mine.]

Of course, I was not the least bit satisfied with Daryl's reply and reasoning, so I sent him this:


I come out of the Silence = Death generation and never trust gay orgs when they say they're working behind the scenes, when we are dying from AIDS or bullying. Do you have proof that speaking about the bullying deaths does lead to copycat deaths?

As you know, GLSEN 's silence is on top of the silence from Kevin Jennings. So we have a professional advocacy org silent and the Safe Schools Czar is silent. I don't think that is the best way to deal with this deadly problem.

You say you want to tread carefully. Ok, but why? Who are you afraid of offending or what problems/harms would come from speaking about the Walsh and Brown deaths?

How do you respond to longtime gay activists like myself who want loud leadership from our orgs about this problem, which other bloggers are labeling an epidemic?

While I waited for Daryl's new response I came across this April 9, 2090, release from GLSEN, in which they not only speak about recent bullying deaths, but also exploited the most recent to promote their then-upcoming Day of Silence. Needless to say, I sent off a follow up, with new concerns. From GLSEN's 2009 statement:

An 11-year-old Massachusetts boy, Carl Joseph Walker-Hoover, hanged himself Monday after enduring bullying at school, including daily taunts of being gay, despite his mother's weekly pleas to the school to address the problem. This is at least the fourth suicide of a middle-school aged child linked to bullying this year.

Carl, a junior at New Leadership Charter School in Springfield who did not identify as gay, would have turned 12 on April 17, the same day hundreds of thousands of students will participate in the 13th annual National Day of Silence. [...]

So, why a statement last year, but silence now? Lo and behold, in this reply Daryl goes on the defensive, and all of a sudden, it turns out his org is going to make a statement:


If you look on our Facebook page (www.Facebook.com/GLSEN) and Twitter page @glsen, I was very vocal until the Seth Walsh news broke. Then you'll notice a silence. I understand where you are coming from, but please understand we did not come by the decision to pull back publicly lightly. We may be wrong but it's a chance we were willing to take.

We are very proud of our work. (We also have had four different national staffers, including our ED, in a MN school district in the past two weeks. They've had 4 LGBT suicides in the past year. We're more than just an org that puts out statements.) There hasn't exactly been a dearth of gay orgs putting out statements. We are trying to be responsible. Please judge us by what we do the next two weeks not just the past few days.

For what it's worth, we will be releasing a statement tomorrow with our sister orgs that responsibly reflects our commitment to supporting young people. [Emphasis mine.]

Bravo, GLSEN! For in a matter of less than an hour having no statement at present, something in unnumbered weeks, you are going to be breaking your silence - tomorrow. Damn, I'm glad I opened my mouth about all this.

When the statement is released, I will curious to see if there is any backbone demanding action and speaking out from the White House and the Education Department.

For what it's worth, it's not just a simple matter of an advocacy org dedicated to fighting bullying to be vocal in offering condolences to families and friends of suicide victims, condemning the school officials that may have ignored the bullying, and also telling the gay community and politicians what the hell you're doing about the problem.

Silence is deadly. It has killed fags for centuries, in many forms and societies. I will not accept silence from Jennings and GLSEN with these new tragic deaths in California and Texas.

I speak as a gay man who was bullied in the 4th grade at Woodrow Wilson Grammar School in West Caldwell, NJ, because I played hopscotch with the girls. I was taunted as a sissy because I not only didn't play basketball, I didn't know its rules. This is mentioned to give you a sense of why I am so upset over the bullying deaths. I identify with the dead and bullied kids.

Sorry, Daryl and all the other professional gays at GLSEN, and your former boss Jennings, but I will not rest until you have properly fulfilled your duties. The dereliction of responsiblity to not be a silent observer is outrageous.

Finally, I will not suffer Gay Inc fools who think stating their org is working behind the scene is going to satisfy me. If that approach did any good for America's gays, DOMA and DADT would be in the dustbin of history, and we'd all be toasting the passage of ENDA.


(Eliza Byard, center, flanked on the left by Rea Carey of NGLTF, and Byrd's partner Eva Kolodner, at the Whtite House, June 29, 2010. Risk some access, on behalf of the dying bullied kids, please! Credit: NGLTF.)
Posted by Unknown at 6:34 PM
Email ThisBlogThis!Share to TwitterShare to FacebookShare to Pinterest

Now you see why I didn't pay $500 a plate for GLSEN's fundraising dinner. Cuz they'd rather raise funds than raise Hell!