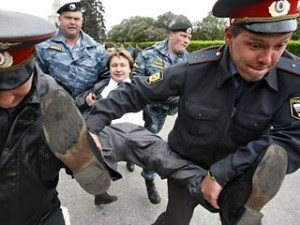 (Mr. Alexseev, under arrest at a 2009 gay demonstration in Moscow.)
This past Wednesday, September 15, was the beginning of a five-day ordeal for Russia's longtime and leading gay activist Nikolai Alexseev, when he was stopped from boarding a plane to Switzerland by Russian police. I am happy to report he is out of custody, and not abandoning his activism.

Nikolai was held incommunicado, interrogated about his complaints against Moscow's mayor over his years of refusal to grant a permit for a gay pride march, and possibly drugged. Click here to read his account of the ordeal he endured.

As soon as word reach European and American activists about Nikolai's disappearance into the maw of Russian police forces, blogs lit up with info, the UK Gay News site called gays in Moscow and kept all of us informed, gay and mainstream reporters contacted Russian embassies and consulate, and other forms of pressure were applied to win his release.

Here's the report from my hometown of San Francisco, where thankfully members of Marriage Equality USA quickly left their work places, and rushed to the the best place to lobby for disappeared Nikolai. From one of the participants, my pal Molly Mckay:

Six of us assembled at the Russian consulate late Wednesday afternoon. There was a fence with an intercom and video camera. We pushed the button, a voice told us to go to the second door and we had to wait in line. The assistant consul told us she did not speak English. Luckily, we had a young native Russian speaker with us.

The consul said she was sorry to hear about Nicolai, but there was nothing she could do. She gave us a phone number to call, for the vice consulate Igor Schetctor, who was not there today. She took our biz cards.

We were on our way out when, low and behold the vice consulate was there at the exit gate, and came out to talk to us. He also hadn't heard the news but said he was getting our emails and trying to get info for us.

Yep, true activism taking place within hours of one of our brothers detained and not-heard-from inside Vladimir Putin's authoritarian Republic of Russia. I offer nothing but praise and gratitude to the Marriage Equality USA folks who rapidly responded, when time was of the essence, to show the local consulate - while still open for business - that American gays would not rest until Nikolai was set free.

Oh, and Gay Inc, global and domestic divisions, wished him luck in the gulag. The enormous, in terms of staff and researchers and hundreds of millions of bucks, Human Rights Watch, said nothing on their site, forget about engaging global activists on Nikolai's behalf.

Over at the International Gay and Lesbian Human Rights Commission site, their hard-to-find and slow-to-read ticker tape links to the release from another org, the International Lesbian and Gay Organization, the only gay non-governmental organization that apparently bothered to issue a call to action.

The IGLHRC cross-posting didn't mention if the group was also concerned for Nikolai or if it was lifting a second finger to do something on his disappearance. It's not enough to just pass along a release, in this situation, and not speak out as IGLHRC for the jailed gay activist.

Amnesty International USA, in keeping with never making news, mainstream or on gay blogs for whatever it may do for gay globally, posted not a thing at their LGBT page. Amnesty's gay blog was last updated in August, when California's Prop 8 was found unconstitutional.

You know the domestic Gay Inc orgs were just as uninterested in Nikolai's disappearance as their international counterparts. Nothing from the Human Rights Campaign, the National Gay and Lesbian Task Force, or the Gay & Lesbian Alliance Against Defamation.

What excuses do HRW, IGLHRC, Amnesty, Global Equality, HRC, NGLTF and GLAAD have to say about their silence this week, as a prominent Russian gay activist was subjected to frightening mistreatment by Putin's repressive police?

I fear we will never have the professional advocacy orgs we need, and that the ones we have now are so incapable of either a rapid reply or community engagement beyond the conference-circuit. Shame on Gay Inc for their outrageous silence and disengagement over Nikolai's abduction last week.
Posted by Unknown at 5:02 PM
Email ThisBlogThis!Share to TwitterShare to FacebookShare to Pinterest