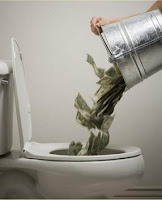 During the Watergate scandal, the man leaking much damaging information that helped bring down President Richard Nixon, associate director of the FBI Mark Felt, alias Deep Throat, offered three words of advice to unravel the mysteries of the crimes committed by Nixon and his staff: follow the money. Good advice at any time.

I decided to see what data on the Human Rights Campaign's donations to Democratic and Republican federal candidates and PACs was available for public inspection at the OpenSecrets site.

The data stretches back only to 1998. I extracted amounts given by HRC to Senate and House incumbents and challengers, and PACs, then added them up by party for a given election cycle. Here is the rough breakdown:

For the most recent twelve-year period, HRC gave $6,891,865 to national Democrats and assorted party PACs.

Over that same time, HRC's donations to GOP politicians and PACs came to $708,072.

What did the gay community get from HRC funneling nearly $7 million to the Democrats since 1998? A hate crimes bill that has greatly benefited Matthew Shepard Inc, but done so little to prevent attacks against gays and nothing to move employment or housing protections forward.

And the $708,072 to the GOP side bought us nothing of lasting value, but allows HRC to maintain the fiction that they're a bipartisan org.

To be fair, some of those millions helped lift the HIV travel and immigration ban, and that is something I applaud HRC and AIDS organizations for accomplishing.

What about your thoughts on HRC contributing almost $7 million to Democratic candidates and PACs? Are you satisfied with what those seven million gay dollars bought us?
Posted by Unknown at 5:07 PM
Email ThisBlogThis!Share to TwitterShare to FacebookShare to Pinterest

No doubt, the huge sums given by HRC to Democrats facilitated many visits to the White House. Access to cocktail parties and movie nights for the leaders of Gay, Inc. Nothing for the rest of us.

I say again that LGBTs need to break from the Democrats and adopt the strategy of direct action and political independence that brought gains for the MOVEMENTS demanding rights for women, labor, African Americans.

In a word NO. It sucks and HRC sucks.

But what might be a great followup is how much the HRC actually raked in in those 12 years and the actual percentage they spent on donations/lobbying.