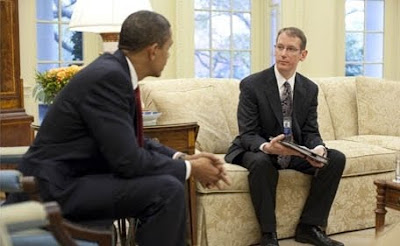 (The President with Jeff Crowley. Photo credit: The White House.)
A friend and political observer in Washington sent along an announcement from a major healthcare think-tank and advocacy org, about an important forum next week related to the needs of people with disabilities, and one of the participants caught my friend's eye:

At 9:30 a.m. on Sept. 8, the Kaiser Family Foundation will hold a policy forum examining the health care issues facing people with disabilities and the opportunities and challenges presented by the new health care reform law enacted earlier this year. The discussion will explore the changes in health reform that could affect access to affordable health care for people with disabilities as well as the current and future role of the Medicare program in serving this population.

Panelists will include Jeffrey Crowley, senior advisor on disability policy at the White House [...]

I thought the openly gay Crowley was the Obama administration's full-time point-person for the many complex issues concerning the needs of people with AIDS in America and other domestic HIV matters.

Part of the reason why I believed Crowley's sole responsibility was running the White House Office of National AIDS Policy (ONAP), is because when he signs posts for ONAP's blog, such as this one from mid August, he is identified as director of that office. Period.

However, his official ONAP bio gives a fuller picture of all that he's tasked to do for the administration:

Jeffrey Crowley is the Director of the Office of National AIDS Policy and Senior Advisor on Disability Policy at the White House. In these roles, he is the President’s lead advisor on HIV/AIDS policy and he is responsible for coordinating disability and health policy issues for the Domestic Policy Council. [...]

If the "AIDS Czar" position is just a part-time job under Obama, is that a downgrading of it from when George W. Bush occupied the Oval Office? Also bear in mind that not every person living with HIV/AIDS is a disabled individual. Disability and HIV concerns each deserve a presidential advisor solely focused on that concern. An undated and "frozen" WhiteHouse.gov page says nothing about non-HIV duties for Bush's AIDS assistant. An excerpt:

On July 2002, President Bush appointed Joseph O’Neill, M.D., M.S., M.P.H., to serve as the Director of the White House Office of National AIDS Policy. Dr. O’Neill, who is also a member of the White House Domestic Policy Council, leads an expanded AIDS office that is responsible for both domestic and international HIV/AIDS issues. [...]

This is just my humble opinion: I fully believe in 2010 that America's AIDS agenda, requires nothing less than an ONAP director whose sole responsibility is AIDS.

Putting the new facts (to me at least) about Crowley's part-time position in the larger context of the Obama administration's ridiculous slowness in creating and unveiling their National AIDS Strategy, among other issues such as not fully funded at-home and global drug programs, illustrate a diminished commitment to solving myriad AIDS problems.
Posted by Unknown at 3:56 PM
Email ThisBlogThis!Share to TwitterShare to FacebookShare to Pinterest

"This is just my humble opinion: I fully believe in 2010 that America's AIDS agenda, requires nothing less than an ONAP director whose sole responsibility is AIDS."

Why? Is AIDS spreading faster again?

If the "AIDS Czar" position is just a part-time job under Obama, is that a downgrading of it from when George W. Bush occupied the Oval Office

Who are the rubes now, Michael?