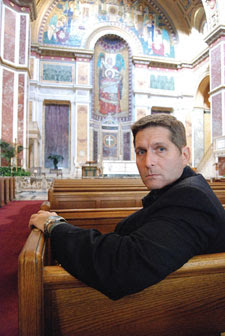 For the longest time, I was convinced the tightly-wound conservative gay lobbyist Phil Attey, a staffer at the Human Rights Campaign for a number of years, and devout Catholic, was a plant from the Vatican. I'm convinced his agenda is to keep righteous gay anger from hitting the church's leaders, and that he's puts his religious agenda first, gay issues second.

Phil was in a tizzy last year, with a web site ChurchOuting.org, since taken down, in which he meekly threatened/promised to out clergy working against gay marriage. Not a single priest was outed, but Phil captured some straight media and gay blogger attention for his efforts.

He has a new, recently-launched, and useless gay niche advocacy org, Catholics for Equality, and it's riddled with support from other HRCers, a matter upsetting others. Members of the Rainbow Sash Movement have created a YouTube video, and this note accompanies it:

There is some concern among Gay Catholics that Catholics for Equality are unduly influenced by HRC. There are ethical questions being raised about not only the vetting process being used for leadership positions, but also about the relationship between Board appointments and HRC.

The Spero News, a religion and values site, last month delved into key players at the start of the org and one board member:

For his part, Palaicos is a board member of Catholics for Equality and also political co-chair of the HRC’s D.C. Steering Community. [...]

With Attey at the helm, a local HRC co-chair on the board, and two members of HRC's religious arm helping to launch the org, it's no wonder the Rainbow Sash folks are pointing out the heavy influence of HRC.

What is the agenda of the org? According to Phil's release, it is:

[T]o support, educate, and mobilize Catholics in the advancement of freedom and equality at the federal, state, and local levels for our lesbian, gay, bisexual, and transgendered family, parish and community members.

Sounds like the HRC agenda, with the word Catholics thrown into the mix. Not sure why this agenda isn't already part of HRC's religious arm and why Phil just didn't go work for his old boss. Interestingly, a board member, Father Tony Adams, today on Bilerico explained a key missing component of the new org:

Personally, I don't like that fact that the group has decided that C4E [Catholic for Equality] will not try to change the Catholic Church.

Oh. Then. What. Is. The. Point?. Frankly, the Vatican must be quite pleased with what is not on the org's plate.
Posted by Unknown at 10:46 PM
Email ThisBlogThis!Share to TwitterShare to FacebookShare to Pinterest

Do you ever have even one positive thing to say about any organization anywhere?

yes, but phil attey's org has nothing positive going for it. no need to pretend this org is good for the gays, when it's only good for the vatican.

however you might feel about hrc, those folks you mentioned who staff hrc's religion and faith program are good organizers, and good at helping new or growing organizations to develop.
it's completely ridiculous to write them off without knowing about their history of supporting similar growing organizations, like california faith for equality, and a similar interfaith organization in maine.

good organizers? at what, exaxtly? the HRC was supposed to deliver legislative change at the federal level to protect gay folks, and they have failed at this. miserably so.

to help divert attention away from their legislative failures at ENDA and other acts, they've created the religious program. it's just another racket for HRC, just like their useless equality index.

you say the folks i mention from the HRC religious program are good at organizing and helping orgs grow. who the hell supports growing an org run by phil attey?

i'm not speaking about the legislative arm of hrc, about whose work i am not disagreeing with you.

i hear your frustration with hrc, but i hope that you also know there are talented people working there. the religion and faith program is an important part of growing our movement's integration with lgbt inclusive faith leaders and communities of faith. i just ask that you don't write them off so flippantly.

i'm too old and fed up with your pals at HRC's religious desk. the entire org is a drain on the community and does nothing more really than suck up gay dollars, then keep building the HRC empire.

oh, federal changes that directly benefit gays, like ENDA and other protections? nope, HRC hasn't delivered and i'm in no mood to cut the religious arm of the arm some slack.

here's a radical notion, after 30 years and hundreds of millions of gay dollars wasted by HRC: deliver some tangible results. enough with the chicken dinners.

and leave the religious issue to gay religious orgs. HRC does nothing well and they deserve heaps more criticism.