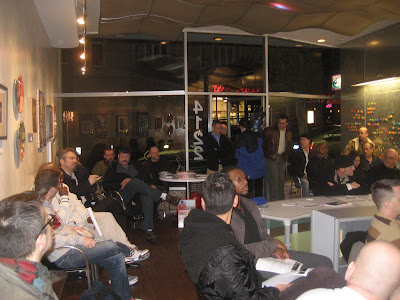 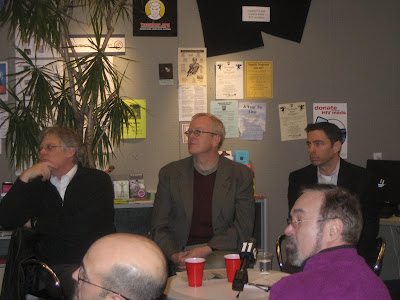 (On the far left, Dr. Chip Chambers, coauthor of UCSF study.)
A meeting was held in the Castro neighborhood last night to discuss the recent hysterical media coverage about gays and staph infections, and what the UCSF study at the center of the media firestorm means for gay health.
KTVU was there and ran a decent story on the meeting, which you can view here.
Unfortunately, KTVU's crew left after an hour or so, and they missed San Francisco Chronicle science reporter Sabin Russell near the end of the meeting explain and defend his staph coverage last week.
He said he had nothing to apologize for in his reporting and encouraged people upset with the Chronicle to send letters to the editor. I suggested that in the future he move away from his standard practice of only quoting UCSF researchers and spokespersons, and also quote voices from the gay community either skeptical of the research and how it's presented to the media.
Believe it or not, the organizers of the forum, executives of the SF AIDS Foundation, hadn't invited anyone from the UCSF press office to the meeting to discuss what led to their offensive release on the study, so no one from the UCSF office directly responsible for spurring the global homophobic headlines was there to be publicly accountable to the affected gay community.
This will come as a shock to many who know of my contentious history with Sabin Russell, but I give the dude tons of credit for attending the meeting on his own time (he wasn't there to report on it), and for listening to the community conversation. Versus the no-shows from UCSF's press department, who have made no effort to stage their own town hall meeting to engage the community.
In other staph news, GLAAD sent me a message today responding to a question I posed to them yesterday:
Why did GLAAD wait four days before saying a peep on the staph coverage, but issuing a statement on Heath Ledger's death only minutes after that news hit the wires?
Here is the reply, which I am very skeptical of, and which I ask you to swallow with a large grain of salt.
Does anyone really think the NY Times reporter needed the "resources" of GLAAD to help him get out of his office, talk to gays on the street, detect the anger in the community, find the CDC and CWA releases on the web, in order to write his article?
I find it troubling that the gay community's supposed media watchdog can allow homophobic stories to run for four days without publicly challenging the hysteria, and then asks activists to accept assurances of vaguely working behind-the-scene as proof that they were combating the troubling coverage.
A group with a $7.7 million annual budget ought to be able to easily and quickly advocate publicly for its community, while also using back channels with the offending press outlets.

I hope all is well. We’ve outlined our work on the MRSA story in the statement below. Please let me know if you have any further questions.

The MRSA story involved complex medical research. When we first heard of the story, we needed to get fully educated on all the issues. To this end, we consulted with The Gay & Lesbian Medical Association. Their expertise informed our ability to analyze the media coverage accurately. We felt it judicious to take the necessary time, care and caution to understand completely the story so that we could offer the best suggestions for media to report on the MRSA strain in the most fair and accurate way. As always, most of our media advocacy work happens behind-the-scenes – criticizing media outlets in the most effective way the situation calls for. We would have done a huge disservice to our media contacts and to our constituency had we spoken before we had all the facts. Since our statement and outreach we’ve been encouraged by the quality of coverage as put forth in the The New York Times and Newsweek.com, and are encouraging other outlets – including those who misreported the story earlier – to run similar pieces.

To expand on our behind-the-scenes work: we provided resources to The New York Times San Francisco Bureau Chief, Jesse McKinley, who did a comprehensive follow-up to the MRSA story exploring the anti-gay right's manipulation of the story and the researchers’ missteps in their original statements. We also blasted our Eye on the Media document to nearly 50 health reporters at 28 national and key regional news outlets. We pitched GLMA's President Joel Ginsberg into and provided resources for an ABCNews.com follow-up piece which explored the MRSA controversy (http://www.abcnews.go.com/Health/Germs/story?id=4172257=1). And we’re actively pitching follow-ups to the Wall Street Journal, Reuters, the San Francisco Chronicle (the latter two of which reprinted, without scrutiny, problematic statements by researcher and lead author Dr. Binh Diep).

Heath Ledger’s role in forever ties him to the media history of our community. Responding to his tragic death was an acknowledgment of his iconic performance and of the lasting influence film has to change hearts and minds.

Posted by Unknown at 12:06 PM
Email ThisBlogThis!Share to TwitterShare to FacebookShare to Pinterest

Translation: "We'd rather kis dead straight ass than fight for the community we supposedly represent."

Oh come on. It probably took less than a minute to write the one sentence boiler plate "he will be missed" comment. To talk intelligently about MRSA requires reseach and medical knowledge. Sure, if all you want to say is, "gays are really really mad and offended" that takes no time. But if you want to go into substance about MRSA infection in other communities, its history, and the conditions that could contribute to an outbreak you can't just dash something off. Maybe GLAAD's a bit more particular that their statements are supported by fact than, say, others who have opinions.