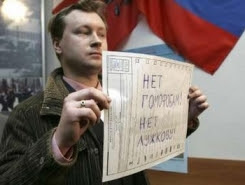 My brave activist brother Nikolai Alexeyev sends word of a major advancement in Russia, not just for gays, which in and of itself is a major development, but a real stride forward for democracy.

To the courageous Nikolai, and all protesters detained in December, I say on behalf of the gay activist community in San Francisco, in political solidarity, we proudly salute you and your nonviolent quest for Russian democracy and full equality for LGBT people in your country.

Congratulations, to all Russian gays and pro-democracy forces on this legal victory.

It became known on Friday that Moscow magistrates court # 367 judge Larisa Bogdanovich acquitted all gay activists detained on 2 December at the polling station # 165 during State Duma elections while they participated in "protest voting". An hour later after the activists were arrested homophobic Moscow Mayor Yuri Luzhkov, who banned two Gay Prides in his city in 2006 and 2007, voted at the same polling station.

More than two dozens of Russian gay activists came to vote at the polling station, where Moscow Mayor usually casts his votes, to express their protest against the whole electoral process and homophobic position of all political parties including President Vladimir Putin’s "United Russia" for which Mr. Luzhkov was heading Moscow list.

13 activists were detained inside the polling station by special security and police. All of them, including the organizers of Moscow Pride Nikolai Alekseev, Nikolai Baev and Alexey Davydov, were brought to Tverskoi district police station where they spent seven hours and were accused of conducting a picket without notifying the Moscow authorities. According to the Russian law it is an administrative offence which carries a fine of up to 2,000 roubles (40 pounds).

Prosecution of Tverskoi district of Moscow ruled that by detaining gay activists for more than 3 hours policemen seriously breached Russian Administrative Code. All activists were released from police after the surprising appearance of prosecution department representatives.

Moscow magistrates court interrogated two police officers who allegedly took part in activists’ detaining on 2 December. According to court decision, police officers were unable to say what the detained persons did inside the polling station. They said that by arresting people they only followed the orders of the higher authorities within the police.

Court observed that activists did not have any agitation materials with them, they did not demand anything from the authorities by using placards. Court concluded that there was no picketing held in the meaning of Russian law on public meetings which means that persons detained did not conduct an illegal public gathering.

Organiser of Moscow Gay Pride and one of the initiators of homosexuals’ protest voting during Duma elections Nikolai Alekseev, who wrote on his ballot paper in Russian "No to homophobes! No to Luzhkov!" said on Friday that "this is our first considerable victory in courts in the legal fight with Moscow authorities and Moscow Mayor personally. Lawlessness of the authorities can be witnessed during all our actions but up to now we never won in court. This is a positive signal".

President Putin’s "United Russia" party overwhelmingly won parliamentary elections on 2 Dece mber though the Moscow list of the party with Mr. Luzhkov as its head got slightly less votes than in the country in general.

Posted by Unknown at 4:01 PM
Email ThisBlogThis!Share to TwitterShare to FacebookShare to Pinterest