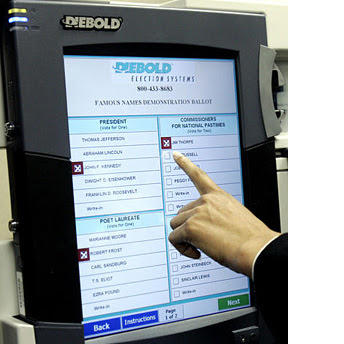 Diebold Chief Gave to OH GOP in July
Technically speaking, that headline is correct and should capture the attention of the public relations department at Diebold.
A filing with the FEC by the Ohio Republican party lists Robert M. Mahoney as someone who donated $500 to them in July and is the chairman of the board of the Diebold Corporation, a voting machine firm with a supposedly strict prohibition on executives making donations like this.
Mahoney's Forbes.com profile says he retired from Diebold in April 2000, leading me to believe he didn't necessarily incorrectly tell the FEC he's the current chairman. I suspect the filer of the FEC report, the Ohio GOP, forgot to the include the word "former" when stating his occupation. Look at his other donations over the years and you'll see that word is used.
Still, given the uproar in the last presidential election over donations from Diebold executives and board members to Republican candidates and groups, which forced the corporation to enact a ban on political donations, I'd expect this giant of industry to closely monitor web sites tracking donations. Just to make sure no one at Diebold is violating company policy, or improperly giving the impression that a very recent donation is from someone no longer affiliated with them. Right?
There are many fears among voters and some local politicians about the security of voting machines, not just from Diebold but other manufacturers also, and potential for tampering with the results, or lack of paper trails, so voting machine makers have a tremendous civic duty to correct any errors in FEC filings, from any source, that show company executives are contributing to candidates.
I'd like Diebold to show that part of its vigilant enforcement of company policy includes actively correcting FEC mistakes, and that they commit themselves to do everything in their power this election cycle to avoid even a hint of improper partisanship.
Voters need constant reassuring from election officials and local boards across America, and voting machine corporations, that the integrity of casting a ballot is not compromised by politicians or company executives.
BTW, Mahoney's latest donation was in September when he gave $1,000 to Ohio GOP Sen. George Voinovich's reelection campaign. That donation lists Mahoney as executive of the Timken ball bearings firm.
Posted by Unknown at 2:31 PM
Email ThisBlogThis!Share to TwitterShare to FacebookShare to Pinterest

And see the Sunday NY Times Magazine today for a detailed article about why we should abandon the use of Diebold's products for elections entirely.